Why the Christian Church Is Not a Safe Place for an Artist: 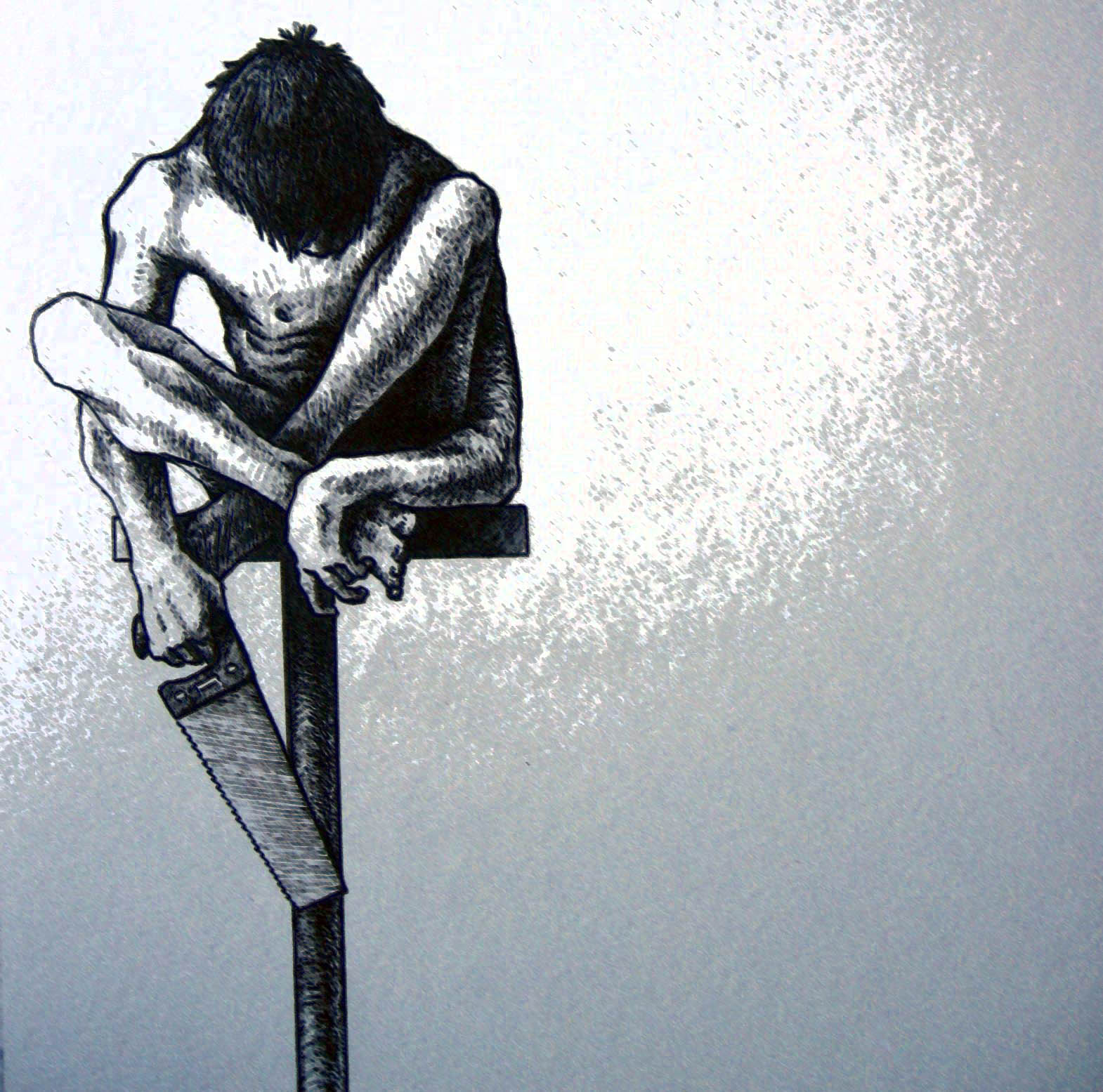 I am growing more and more uncomfortable with organized religion, and I think it has a lot to do with beginning to really accept who I am as an Artist.

As the child of missionary parents I was raised, after all, in an arrow shot from the beating heart of North American Protestant Evangelicalism. But perhaps that played a role, too -- the fact that I didn't grow up in the thick of it, but off in the periphery, where a great number of the fervent intentions of NAPE culture were forced to rub up against some of the other wild varieties of human experience.

It might be necessary for a guy hoping to translate the bible into Machiguenga in the rainforest-foothills of the Andes to court the affections of a megachurch pastor in Southern California, after all, but the two share very little common ground in terms of faith-application. I was raised in the company of the former, and was therefore as baffled by my later-in-life encounters with the latter as one of them would've been at a monkey-brains-banquet in my more-or-less home country, Peru.

So I'm an artist, and a faith-outsider.

The four years I spent as an art teacher at a private, Christian high school were therefore doubly uncomfortable for me, because not only was I required to interact daily with what was to me a somewhat-foreign religious culture, I was also at the time beginning to slough off some of the fear that had kept me from fully accepting my identity as a Creator-for-Life -- an Artist. Divorce had kicked my butt-and-teeth-and-kidneys, and I had begun to realize that the only thing keeping me from attempting to spend the moments of my life Making Things was, well... me.

That culture was a kissing-cousin to the one of my childhood, so I was quite familiar with it. But as I changed and became more fully Me, I began to grow more uncomfortable with a lot of the presuppositions of my childhood culture as well. Still, I felt I could straddle that line. They hired me, after all, and kept me on despite a number of complaints from very influential patrons of the school. They, too, wanted this marriage to work.

The thing about burrs-under-the-saddle, though, is they don't really belong there. They're annoying. And if you leave them there long enough, they form painful boils. Fact is, somebody's gonna get bucked off.

That somebody was me.

I'm not here to talk about that, though. By the time I was booted from my teaching position, I'd long been aware of the possibility that my contract might not be renewed. I was also aware that all I had to do to keep my job was to stop writing the sorts of things I was writing on this website... make it a bit safer, I guess, for Christian-kid consumption. Nobody ever told me I had to stop writing. They just made it clear that the sorts of things I was writing didn't fit with their Idea of a Christian School. And with the number of students and former-students who were reading my stuff, well, hasta la vista, Barkey.

I was okay with that. Mostly.

It was their prerogative to build the sort of school they wanted, and although most of the parents and other teachers and (as far as I know) students were completely cool with what I was writing and how I was conducting myself in my classroom, it only takes a small-but-critical mass of disgruntled people in that sort of environment to end a career.

I was by then ready to take the risk and go for a glide into the forever-uncharted airspaces of Being-an-Artist (mostly writing screenplays), and I am grateful for the love, support, and money that they gave me whilst I was there. The love and support helped get me through my divorce-and-aftermath. The money paid for my current two-year sabbatical. For all that, I will be forever grateful. In the words of some little hamburger joint you've probably never heard of, "I'm lovin' it."

The only reason I'm not happy with how it went down is because of what it said to the kids.

But most importantly, they learned that if there are things about yourself that the Establishment has deemed dirty or inadmissible, then it is your job as a Good Little Christian to keep those things to yourself (or at the very most, to only ever express them over a box of kleenex in the school counselor's office). What you must absolutely never do is to put them into your artwork. I mean, you can, but if you choose to do it, then your work must be hidden away, out of public view.

The reason I bring this up is because I've been thinking about a project I did with my mostly-Senior class of Graphic Design / Photography students in my final year as a teacher. I got the idea from an Art Teacher conference I attended in New York, and the gist of it was that my students had to produce a number of photographic self-portraits based on prompts that I gave them. It was a time-consuming, difficult assignment (I know, I did it myself), and as a result, there was plenty of the usual high school procrastination and avoidance.

But something else happened over the course of the project, as well. Something beautiful. A number of the students really got into it, and began to turn in self-portraits that were breathtaking in their beauty, power, and honesty. When we reviewed them in class, I swear that windowless,* darkened, rectangular space turned into something sacred.

Not a church, so much as what a church really ought to be. More like an AA meeting, maybe.

Someday, perhaps, I'll write to more of those students and see if they'd be willing to let me share some more of their work, here, but for today I want to focus on one of the pictures from that series that was created by a lovely young woman named Emily. The prompt was "Lost You," and what Emily found made me want to cry. 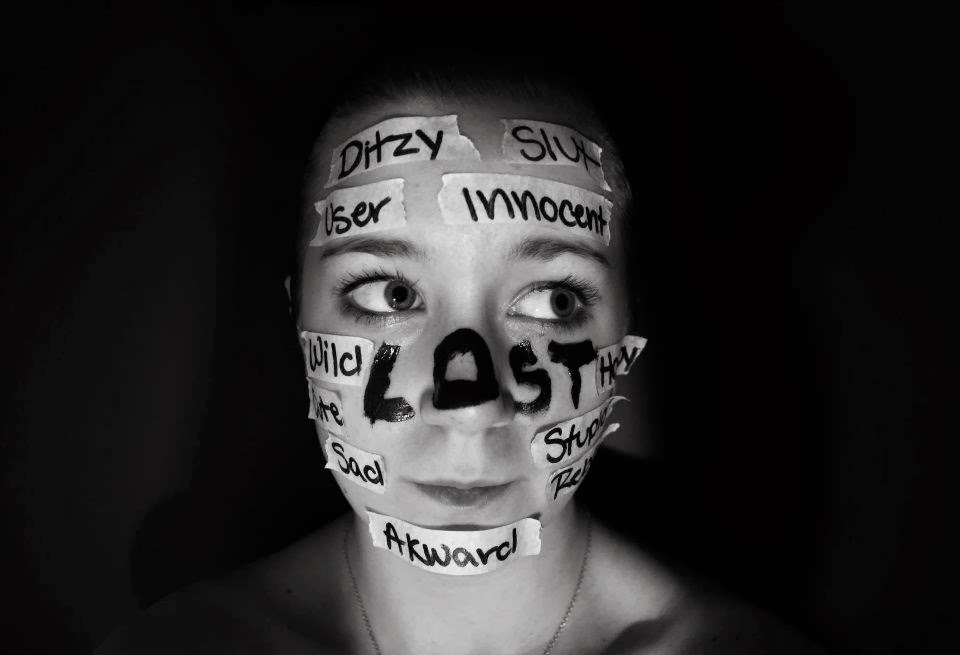 Beautiful, right? And heartbreaking. And honest.

Too honest, apparently, to be shown on the walls of the church-hallway where we did our yearly art show. The church to which our school was attached. The church that was supposed to be encouraging people to come just as they were, and to share who they were openly and honestly within a loving, accepting community.

Unless, of course, how they saw themselves (or believed others saw them) happened to sometimes include the word "slut."

Several pieces from that series (and a number of other works as well) were censored from the show, and while I do not begrudge the church or the school the right to decide what their public face will be, I do feel that their decision in the matter was antithetical not only to art, but to the actual spirit of who that Jesus-cat is, as well.

They seemed to be saying, "Come as you are, and then either publicly pretend to be who we want you to be until you are that person, or leave."

In other words, if you want us to love you... lie.

But both good art and healthy living demand the Truth -- ALL of it. The truth about the times when you're joyous and grateful and in love and happy and excited, yes... but also the truth about the times when you're depressed and self-loathing and anxious and horny and selfish and murderously angry. All of it, with all of it equally valid and important. And if you've created a culture where it's not even safe to place some of the less-pleasant Truths about your human condition into your art (where at least they're being contextualized), well... I'm sorry, my friends, but you've made it impossible for an artist to exist within your walls.

For the Truth to set you free, your commitment to it must be total. You can't be cool with the truth most of the time. That's true for art, it's true for faith, and it's true for life in general.

It's sad to me that the Evangelical Christian Church (on average, in my experience) has created this sort of inhospitable environment for Artists. I know there are exceptions. But I also know that for the most part, churches are more interested in sounding like they're cool with art than they are with really opening themselves up the uncomfortable lessons it might have to teach them. Stick around long enough in almost all churches, and any artist will eventually run up against the Censorship Wall. It'll have a lot of other names, sure, but that's what it'll be: censorship. You'll say a word you didn't know you really weren't allowed to say, or express a thought you weren't allowed to express, and BAM! you're outta there.

Artists are free to attend church, but there are just too many times when they know their input is not welcome. So most of the real ones leave, and organized Christian evangelicalism in this country dies a slow, artless death.

*Seriously... who makes the only room in the whole school without windows be the art room???

A FINAL NOTE: Good writing isn't magic. It's hard work, and the greatest reward for that work is to share it with others. So if you enjoyed this little (ad-free) piece of my brain... please share the love on your social internets. And pick up a copy of my Short Story Collection, whilst you're at it. You can get it as an ebook for less than a fancy cuppa coffee, and it'll last waaay longer.
Labels: 31 Nights art church identity Jesus