in defense of Arnofsky's NOAH (and stories in general) 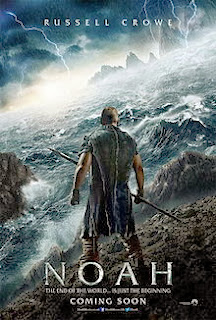 Have you heard the news? Hollywood, the ostensible Whore of Babylon (see Book of Revelations) is at it again, taking another perfectly-literal Bible story and bastardizing it into the movie "NOAH," and blah-blah-blah please-shoot-me-now.

So... I just clicked on a link on Facebook entitled "Russell Crowe's 'Noah' film -- a Warning for Christians" and got pretty much exactly what I expected. The initial reason I clicked on that link is because it annoys me when films are described as belonging to one of the actors. Actors are awesome, but they're also paid performers with less creative ownership by far than either the writer or director, who in this case are one and the same: Darren Arnofsky. What I found at that link is just the sort of overly-grandiose, hyper-obsessive rhetoric one might expect from a web page devoted to, say, declaring a jihad on Peter Jackson for his immoral perversions of the Sacred Scriptures of Hobbit, so I'm not going to bother to specifically address how stupid it all is. Read it yourself, if you must, but I'd rather take this opportunity to say something super-basic about movies, for all you neophytes out there. Are you ready? Good, because here it is:

A movie is NOT a book.

I want to be annoyed at having to write such an obvious tautology even once, but since I'm aware that not everyone's spent as much time as I have obsessing about movies, I suppose it could bear repeating. So here it is, again: a movie is NOT a book. Movies and books are completely different art forms, and getting all bent out of shape because a movie based off of a book you love isn't sticking exactly/perfectly/entirely to the book you've imagined in your head is just stupid. A movie is not a book, and therefore it cannot follow the same path as a book if it's going to be the best movie it can be. A movie should be judged on its own merits, not by how closely it adheres to the source material.

Stories can be re-shaped to say any number of things. How many thousands of lessons and themes are teased out of the same few Biblical stories from pulpits across the world on any given Sunday? How many of those lessons are the absolute, correct one? Does making a story say two different things automatically mean that one of them is wrong?

Hint: The answer to the latter, rhetorical question is "no."

The "substance" of the post that sparked this little diatribe of mine was to point out all the ways in which Arnofsky's story doesn't line up with what the writer perceives to be the truth about the story of Noah. But let's set aside for a moment the ridiculousness of some blog writer knowing exactly what the original Noah story is supposed to mean, and the ridiculousness of forming hardened opinions about a movie you haven't even seen yet, and let's just grant for a moment that this dude is right -- that Arnofsky is NOT being faithful to the Biblical text.

Arnofsky is not intending to be faithful to the Biblical text.

Arnofsky is an artist -- a very, very good one, who has crafted some of the most powerful and challenging morality tales we've got.

And yet this dink's link and others like it are going to get passed around, uber-commented on, and referenced in sermons. In the end, a whole lot of hyper-conservative church people are not going to pony up their money at the theater, and Arnofsky's NOAH is not going to ride the Mel-Gibson-Passion-Gravy-Train. His movie will probably do well, but not that well, and a bunch of Hollywood execs will scratch their heads and wonder why Mel Gibson can be a raging anti-semite who changes the Biblical narrative to turn Jesus into a sado-masochist and make a bajillion dollars in the process, but a master like Arnofsky can't make a biblical story his own and do the same.

Mel Gibson may have his issues, but at least he's famous, and kinda cool, and a very vocal Catholic (a.k.a. "kinda/sort of a Christian"), so who cares if he adds a weird demon-thing to torment Judas, and who cares if he paints an uber-gory picture of a Jesus who seems to like having his skin flayed off his back? Who cares if Jesus makes anachronistic chairs? Who cares if the film Gibson makes is manipulative gore-porn? At least he's "one of us," right?

This is silly, and I would like to take this moment to apologize to Hollywood for my Christian brethren. I'd like to say it's just ignorance about the nature of film, but it feels like willful ignorance to me, and for that there is no excuse.

Now, I've not yet seen Arnofsky's film. For all I know, it sucks the camel's patoot. Not likely, but it might. I'm not writing this to defend the film, but rather to defend Arnofsky's right to make the film -- to enter into the Conversation of Story, and to attempt to say something that is True and Useful in the process.

Will he succeed? Who knows. But a movie is NOT a book, so I for one am going to give his NOAH a fair shake. I'll watch it with my mind and heart open, not just for insight into the original, Biblical story of Noah (which, yes, it is still likely to provide), but also for anything else Arnofsky might have to offer, as well.

*Note: I put a lot of time into giving you this ad-free reading experience. If this post means something to you, you are more than welcome to pay me back by linking the bejeebers out of it on your social medias. And/or better yet, you could go pick up a copy of my book, "IMMORTALITY (and other short stories)." Dankegratzithanks.
Labels: art church film Jesus religion writing