If you like it so much, then why don't you MARRY it? 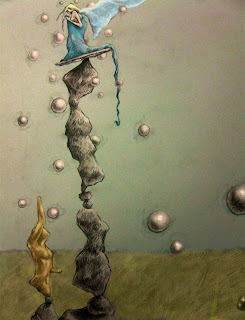 I've just finished banging out the script for a short film called "Abducted" for director Ben Joyner, and since he's in town this week to watch some overdressed friends kiss each other in front of a guy with a Bible in his hands, we decided to sit down and talk about girls. I mean film. Wait, no... I definitely mean girls. But girls as they relate to film, so it's okay.

Ben said something about how he's never been willing to put a girl before film -- that if there was a feature he wanted to work on or something he needed to do to further his film career, he'd always put that first -- and then I said something sympathetic, while what I was really thinking was how annoying it is that he's only twenty-one and not only sure of what he wants to do with his life, but also already really, really good at it (see his reel, below).

Then the conversation got onto how he figures that'd change one day when he's married, and I said how hard it is to be an Artist and be married, and how if you're an artist, you ought to wait until you're much older to get hitched, at which point you have to do it with someone who's as in love with what you do as you are.

Then Ben went and made it much, much worse.

He said, "No, you've gotta marry a woman who has her own thing she's in love with," and that's when I wanted to reach across the table and punch him in the mouth, because really?!? Young, directional, talented, and wise, too?!?

It's absolutely true, though. There is no one who is so married to his/her work as is an artist, and no spouse who is ever going to understand that if he/she doesn't have a passion, as well.

Now, being an artist is no excuse for neglect or selfishness in a relationship. But when you are an artist you are in the business of perpetually making new art-babies, and art-babies are the most demanding little progeny you can possible have. They don't just demand your time, talent, and sanity -- they want your soul.

Here's a little secret, though: Everybody is an artist. We were all born to make things with our lives. Each of us was born with a need to re-shape the world into a story with our signature on it: whether that be as a writer, a home-maker, or a fishmonger. So if you're awake to your own artistry and you want a full and rich partnership with someone you can also smooch in front of a guy with a Bible in his hands, listen to Ben.

Find your passion, find someone with a passion you can support, and go for it.