How to Drink Rat Poison

Forgiving is the worst.

In an ideal world you'd never have to forgive anybody, because A. People wouldn't be quite as turdbucketty as they currently are, and B. You'd be all centered and zen and suchlike, and even if someone did do something turdbucketty to you, it'd be like water off a duck's back.

The latter is something I'm trying to change in myself.
The former is a reality I'm learning to accept. 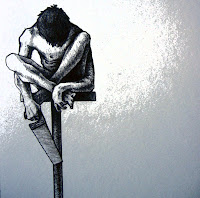 Reality sometimes sucks, and forgiving is sometimes the worst part of it. This is because to really and truly forgive, someone has to actually do something to hurt you, which is rare. Forgiving you for not sharing this post on your social medias is easy and probably unnecessary, for example, because your sin of omission is relatively minor, and I'd have to be kind of a dink to take offense at it.

I think if we're honest, though, most offenses in life should actually be in this category (of the relatively minor), and the time-gap between offense-received and forgiveness-given has more to do with our own pride than it does with someone else's turdbucketness. There are very, very few times in my life when someone has really hurt me, and even then I've generally had at least some part in creating the situation. Sure, there actually are times when somebody hurts you and you've done absolutely nothing to deserve it. Like my buddy who got hit by a drunk driver. Or that time somebody broke into my sister's apartment and stole a bunch of her stuff. For the most part, though, forgiveness isn't a clear-cut case of "I did nothing and then you wronged me, and now I'm gonna let it go."

I wish forgiveness was all about me as the guy in the white hat, magnanimously waving my scepter of forgiveness at the guy in the black one. More often than not, though, it's about letting go of being right, admitting my part, and keeping no record of wrong.

I kinda suck at that.

One of my favorite quotes about forgiveness comes from Anne Lamott, who said, "not forgiving is like swallowing rat poison, and then waiting for the rat to die."

I picked up a new favorite quote yesterday from the book "This Is Where I Leave You," by Jonathan Tropper, where one of the characters says to his recently-cuckolded brother, "The point is, I've been pissed at you for a very long time and that didn't do either of us any good. I wasted a lot of time being angry, time I can't get back. And now I see you, so angry about what happened to your marriage, and I just want to tell you, at some point it doesn't matter who was right and who was wrong. At some point, being angry is just another bad habit, like smoking, and you keep poisoning yourself without thinking about it."

Maybe-kind-sorta I see myself in that, and it makes me sad to think of all the time that I can't get back. Forgiveness takes time, though. It takes a lot of little choices, made in humility. I'm working on it.

How about you? Feel like stomach-pumping a little rat poison?
Labels: relationships