Elevate Yourself: In Defense of Steven Furtick 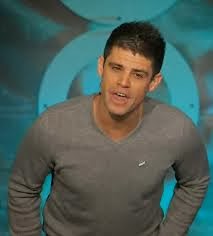 The right reverend Steven Furtick of Elevation Church has been catching some flack lately, and it's not because of his hipster style, rock-solid man-boobs, and chiseled good looks. Nope, it's because he's gone and bought himself a nineteen-acre piece of land (valued at 1.6 million shamoolies), and is using it as the building site for his very own 16,000-square-foot gated mansion.

For some reason, a whole lot of self-righteous people out there think that a man who claims to speak for the Almighty ought not to be spending millions to build one of the largest houses in the area.

As Chunks Corbett (chief financial officer for the humongous evangelical church that Furtick's built up from the ground over the past eight years) has clearly stated, Furtick paid only $325,000 dollars for the land -- a paltry sum, when you think about it. And when you pay just under the third of the value of a thing, you know you've got God's favor. Not only that, but the whole 16,000-square-foot thing is misleading, since only 8,400 square feet of the house is going to be heated. And everybody knows that unheated square footage doesn't count.

Now, we could bicker all day about how someone purporting to speak for God and God's impoverished, itinerant-preacher messenger should maybe live a bit more frugally, but it's stupid to spend our time arguing about the best exegesis of the phrase, "don't muzzle the ox." After all, there are plenty of small-church pastors out there to identify with the poor, the weak, and the powerless. But who will befriend the rich? At which pastor's home can the Koch brothers spend their weekends without feeling, let's face it, just a little bit dirty? And where can all the wealthy people of Charlotte go for spiritual sustenance without feeling guilty over the millions who die every day of malnutrition-related causes, while they roll around in their Hummers and BMWs?

Personally, I think people are just saying these things out of jealousy.

I'm half a year older than this Furtick guy, and look what I've accomplished with my life... practically nothing! Furtick, on the other hand, has built a following of thousands. And sure, yeah, some people might want to argue that an uber-slick marketing campaign might have had something to do with that, but can you blame him? It's not Furtick's fault he's got access to Twitter and Facebook and the internets, and doesn't have to rely on the sort of primitive methods that Jesus had at his disposal.

Besides, isn't all that old-school Jesus stuff just a little bit gauche? I mean, identifying with the marginalized, speaking the truth to power, healing the sick -- that's all a bit passé now, don't you think, now that we've moved into the whatever-the-heck century this is? 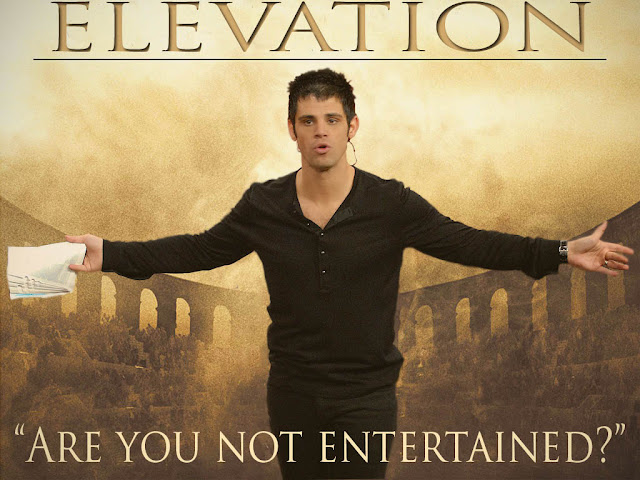 It's sick, really, the lengths some people will go to, in order to discredit poor Furtick.

I worked on a film once with a dude who on a whim had gone to services at Elevation. After the initial "You're new here so we're gonna give you a bunch of merch and treat you like a rock star" bit, they called him the next day to welcome him, and then sent a pizza to his place of work. And this guy had the nerve to complain, saying that they were only giving him this stuff because he'd written on his visitor's card that he was a professional sound-and-lighting guy, and they'd been looking to bring in some more volunteer tech workers. He even had the nerve to make some crack about how when Jesus said to feed the hungry, he probably wasn't talking about an overweight, middle-class white guy. I mean, can you believe that guy? The ingratitude?!?

This, my friends, is what's wrong with America.

Sure, yeah -- we'd all like to see spiritual leaders raised up into the spotlight for something other than their extravagant lifestyles. But who are we kidding? Isn't that just a ridiculous double standard? How can we criticize Steven Furtick, and yet not bat an eye when many of our other successful entertainers build houses that are just as big, or bigger? What's next -- arguing that the extravagance of our entire country is an offense to reason, morality, and any sense of decency?

How un-American can you get?

And it's not like he bought the property with the (secret but probably justifiably enormous) salary he gets from the church. He earned that money the hard way, by writing books in his scant free time, and charging hundreds of dollars for seminars teaching other, less successful pastors how they, too, can duplicate his success and grow giant, cultish, megalomaniacal church-monster-things. Not that I'm saying that he wouldn't have been fully justified in spending his salary on a mansion. It's not easy, after all, to tell thousands of people exactly what they want to hear, week after week after week. But as Chunks Corbett is surely trying to let us know without ever actually telling us what, exactly, Furtick gets paid for servicing serving all these people in this way, Furtick is not spending the hard-earned tithe-money of his apostles on this mansion, he's spending his own.

I know, I know... it almost sounds like I'm criticizing the guy, here. Trust me, though, I would NEVER do that to the Lord's chosen. And anybody that powerful and wealthy has to be the Lord's chosen, right? Because if he's not, then the world is meaningless and horrible, and the bad guys win. That's just unthinkable.

Besides, has anyone else noticed what a gorgeous hunk of man-meat this Furtick is? I mean, seriously. I'm not gay or anything, but wrowr! And if there's one thing I've learned in this entertainment culture of ours, it's that looks totally equal value.

I, for one, am happy to welcome Furtick into the neighborhood. Who would have thought when I moved into the podunkville town of Waxhaw, that I would one day find myself living just a few short miles from a celebrity?

Praise God from Whom All Mansions Flow!

*Note: I put a lot of time into giving you this ad-free reading experience. If this post means something to you, you are more than welcome to pay me back by linking the bejeebers out of it on your social medias. And/or better yet, you could go pick up a copy of my book, "IMMORTALITY (and other short stories)." Dankegratzithanks.
Labels: church consumerism humor