Half a year ago, friend and filmmaker Austin Herring challenged me to write a feature-length screenplay we could shoot for almost nothing. He gave me no guidelines other than cheapness and the parameters of my twisted imagination.

After a brief struggle, I came up with a story about a guy trapped in a derelict, 1970s almost-mansion, living in a world where anything might or might not be a figment of his imagination. At the heart of the story was a man who needed to learn to accept and live with the discomfort of an unpleasant reality, rather than retreat into a series of pleasant fantasies. I called it THE PORTAL and emailed it to Austin.

I'm not exaggerating, either. Austin is one of the most self-assured people I know, and reacts strongly and emotionally whenever I hand him writing that isn't fascinating and brilliant and innovative all the way through (which is always). I can't tell you the number of CAPS-LOCK-YELLING, profanity-laced notes I've gotten from him, where frustration absolutely drips off the pages.

This is, of course, because he loves me. Austin has always assured me that I'm about the best writer he knows, but that I am lazy (correct) and need to push myself harder if I want to write at the level required to be a legitimate Hollywood contendah (also correct).

This time, I told Austin I had a fragile writer's ego and that his personal insults made it hard for me to receive his critiques in a healthy way, and he told me he loved me and I should suck it up and start rewriting.

So I did. Then I sent it back.

"This is boring," he said, dismissing my long, painful weeks of writerly struggle. "There's some good stuff in here, but what you really need to do is to strip it all down and start over. Find the conflict. Ramp it way up. Make it harder on your protagonist." 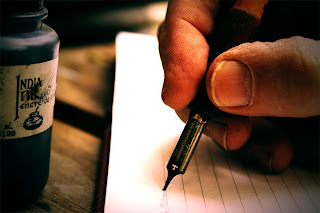 I died a little inside, of course, and then I demonstrated a significant lack of character (or at least, of professionalism). I went back and rewrote, sure, but I didn't strip it down to nothing and start over, because that would have been more than just a lot of work -- it would have been an admission of failure. Besides, I thought, there's no rule that says Austin can't be wrong about a piece of writing. His own writing, for example, isn't nearly as glorious as he sometimes seems to believe.

It is easier to see the flaws in someone else's work than your own, though, and in this case (as in many cases before), Austin was right. I had a good thematic pulse that was driving the writing, but a little voice niggling down in my subconscious told me that there wasn't enough tension in there to interest anybody other than me. To get the story to where it needed to be, I was going to have to work a lot harder.

I didn't want to.

I wanted to be brilliant, right from the get-go. I wanted my first ideas to be fantastic, and I wanted Austin to take one look and fall over weeping with gratitude for the existence of this finely-cut diamond that I'd sliced out in just a few, effortless strokes. But that wasn't happening, and Austin was asking me to step back and look at my story beats for the un-dramatic, lifeless little things they actually were.

That was too painful. It hurt too much, and asked for more humility than I could muster... more faith than I could manage. Faith, you ask? Yes, faith, because if I was going to Kill these Darlings -- these little brain-children story moments of mine -- then I was going to have to believe that there were other, better story moments to be had... and that I was capable of being the one to usher them into existence.

I doubted this, and so I rewrote THE PORTAL again and again without ever really rewriting it, polishing that turd until the day when Austin, in complete frustration, said, "Fine, go write the screenplay. Whatever."

I wrote it. Austin hated it. I abandoned the project and wrote a different screenplay.

I got word that an early script of mine, KILLING HARPER, had been selected as a quarter-finalist for the Nicholl Fellowship, which in beginner-screenwriting terms is a Pretty Big Deal. Not one to sit around waiting for my world-oyster to open, I wrote another screenplay. Then I got news that I'd been cut from the Nicholl after the quarter-finalist round.

My life was over. I sucked. I'd never write anything good, ever. Et cetera.

But then something else happened. I breathed, a little. I found enough perspective to claw my way up out of the mire and attack, again, the treatment for the script I'd been writing for Austin. I sent it to him and... He hated it. This time, though, when he told me I needed to strip it down and start all over, I listened. Something about the not-quite-there experience of the Nicholl Fellowship convinced me that I was going to have to stop protecting my story-children from my own insecurity and really, truly make them bleed.

Kurt Vonnegut once said, "Be a sadist. No matter how sweet and innocent your lead characters, make awful things happen to them - in order to see what they are made of."

So I started over. I reminded myself that it was Fear that had kept me from trying to be a full-time Artist for so many years, and that Fear was just doing its thing, here -- trying once again to take control of my life and keep me from getting to where I wanted to go. This was unacceptable.

I stripped the story down and built it back up, being as mean as I possibly could to my characters. I edited it several times, and then sent it back to Austin... who liked it. Not loved it, of course, because when you're tasked with being a mentor-to-an-artist, categorically Loving their work is just about the least-helpful thing you can do.

But he liked it, and said he thought I had the foundation for something really good... a dark comedy in the vein, perhaps, of the BIG LEBOWSKI. This morning, after another week of mulling it over and scribbling notes in the middle of the night, I went back at it again. And now, I think, it's beginning to become something not just nifty-because-the-scenes-all-fit-together, but perhaps even something powerful... something Real, and maybe a little bit True.

I'm telling you all this because I was a high school art teacher for four years, and in that time I came to realize that the single most significant obstacle to my students making something good was FEAR.

Perhaps you know the feeling. And perhaps you want to believe, as I (sadly) often do, that if you can just get your ducks lined up right, you'll no longer have to deal with this sort of Fear in your life. Everything will fall into place, and you can just BE. I'm here to tell you, though, that this is not the case. Fear will always dog your steps. It will tell you to preserve your ego by insisting to yourself that your first (or fifth, or tenth) effort is good enough. It will tell you that good enough is all you'll ever be, so you might as well stop striving for Great.

And though I'm sure that soon enough I'll be right back down there with you, afraid as ever... I thought I'd send you this little missive from the other side, wishing you courage, hope, and faith.
Labels: film writing