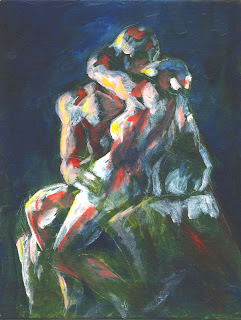 Man, I spend a lot of time whining about North American Protestant Evangelicalism.

What can I say? It was slapped down in front of me before I had a chance to develop my own tastes, and I guess I've always just been a bit too cantankerous to eat what's on my plate without first raising a stink.

(ask my mom about okra)

So here's Annoying Fact # 3,482 about NAPE Subculture: When you're a NAPE and you feel uncomfortable talking about something, you can just moosh it all down into one, stupidly-simplistic sub-heading -- sin -- and then ignore any nuance or subtlety that might come with it.


Nowhere is this more obvious than with sex.

Although you're supposed to be so steeped in the NAPE lore that you know exactly where the line is between "good-sex" and "sin-sex," the truth is that life's complicated, and sex is a sticky issue (heh, heh). Most of the time, nobody's got a clue what's really going on. NAPE culture is binary, though. You're either in or you're out, and the best way to tell if someone's in is if they're following the (somewhat arbitrary, ill-defined) guidelines. And because no one actually knows exactly where the lines are, you get a culture that rewards the most effective sin-hiders (a.k.a., hypocrites).

All that to say: I wanna talk about sex, but since I'm not interested in involving myself in that whole clustercuss by bringing up the "sin" thing, instead I'm just gonna write about why everybody wants to have sex, without worrying so much about whether they should, or when.

The way I see it, We the People want to have the sexy-time for two main reasons:

First, we want sex because in certain regions of our bodies, friction feels fantastic.

It feels so fantastic, in fact, that it fires off exploding asteroid-chemicals of joy in our brains, and creates a feedback loop that sends tendrils down into the deepermost parts of our decision-making selves... overriding such considerations as "the freedom to fart loudly," and "always getting to hold the remote." You could argue that it feels great because of biological imperatives and so on, but the point is that friction feels fantastic, and we're addicted to those brain-chemicals.

The second reason we want sex is because we are, all of us, islands. Alone, alone, alone, we walk our solitary paths to the grave.

We chase the little death, then, to stave off the big one. To get as close as we can to forgetting that final death, fusing our body into another and opening ourselves to the possibility that maybe, just maybe, we aren't so alone. That maybe we can link hands and walk a while with someone in what might just be a picture-window into a mystically-joined, infinite beyond.

Marriage, babies, the community of family -- when they work, they're all an expression of this hope, a reflection of our human yearning for connection... perhaps even a connection with the Divine.

After that, it all gets complicated.

For some reason men (on average) seem wired to slant more toward the first reason. I, being a man, am not particularly proud of this.  It's been my personal experience, though, and my observed experience, as well.

It has also been my observed experience that women (on average)...

-- wired, as they are, to be more physiologically aware of the inherent baby-possibility of sex (you know, being possessed of wombs and eggs and all) --

...are more inclined to slant the other way, toward sex-as-connection.

This doesn't mean I think women can't or don't love sex for the friction, or that men don't ever get it on, in part, for the death-amelioration. Nor does it mean I think we're automatons who have to live out the calling of our subconscious drives. I'm just trying to explore what those subconscious drives might be, and give some background for some of the wild miscommunications that happen between men and women around sex. It's not just pornography and romantic comedies that are keeping us from understanding each other -- it's also in the wiring. He thinks, "I'm not getting enough friction in my life;" she thinks, "I'm not getting enough connection in my life;" and never the twain shall they meet.

Which brings us to marriage.

The difference between a lifelong, committed roommate and a spouse is sex, so it seems to me that the question of why we humans would want to have sex would be particularly salient to any discussion of why we'd want to do something as crazy as getting married. Marriage is nuts.

Are we all barking nutters? Are we bound by our subconscious drive for sex (married people have more sex, you know) to keep smacking into and off of each other, ring-coupling and sometimes un-coupling, until death do us part?

I do know that all sin/sex-obsession discussion aside, I would still love to be in a relationship that fuses those two sex-motivations into one, glorious, lifelong, duo-toned, occasionally-orgasmic enterprise. I also know that relationships are effing (so to speak) hard, and that there is no guarantee that I or anybody else is going to get that. I have a suspicion that the Christian sexual mores were intended (and can often act) as a way of preserving that possibility in our lives. But like I said, marriage is effing hard, and selfishness and culture perpetually conspire against that ideal.

Sometimes, this leads me to despair. To give up hope that a mystical, transcendent, even sacred union like that is possible.

Is that the slough we're in right now, as a culture? Have we given up? Is this why everybody's boinking around? Is this why a quarter of our women are on brain drugs? Is it sex-despair?

I, for one, have certainly felt the sting of that despair. But I think that as long as there is life (and sex), there will be hope.