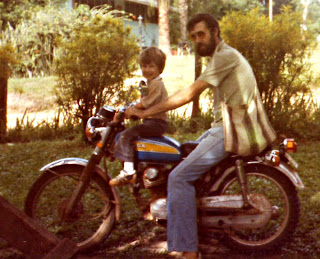 When my siblings and I were young and living with our parents in the Amazon Basin of Peru, South America, our dad would alternate taking us each on our very own Saturday Adventures, which mostly involved hopping onto his Big Blue Motorcycle and going for a ride.

Once to the Port in Pucallpa to watch the rippled, sweaty musclemen offload sacks of corn from the riverboats. Once out up the highway into the low foothills of the Andes Mountains, looking for a billy goat to bring some fresh (stinky) blood to our flock.

By high school, the practice of Saturday Adventures had mostly died out. But one day when I was fourteen, my dad announced a desire to go on an Adventure. We hopped on his Little, Blue-and-White Motorcycle (he'd downgraded) and set off to parts unknown, tracing back roads off through the fields out past Tushmo and back toward where he suspected eventually we'd find Lake Cashibo, and go for a dip.

It was a hot day, but the muggy air felt cool as we zipped up and down the slight rises of the road over the packed red clay that gave Pucallpa its name, bouncing past dust-painted roadside grasses, watched over by the imposing, dark-green bands of mango-trees, hung heavy with lush, yellow fruit.

After perhaps an hour's journey, we made it to the Lake, and then were a third of the way back when the Little, Blue-and-White Motorcycle gave up the ghost. Kaput. Not just out of gas, but oil as well.

There was nothing to do but push, and so we did. Sweating and straining up the hills, hopping on, and then coasting down the other side.

Then the most amazing, hilarious thing happened. An old, old man, gap-toothed and furrow-faced, plodded off a side-trail and onto the road next to us on the back of a horse nearly as worn-down as he was. He greeted us with a nod and a word as he plodded on past and up the hill, leaving us in his gentle dust.

At the top, dad and I caught our breaths, jumped back on, and coasted down -- passing the old man about halfway to the bottom.

Now far ahead, we began to push our steed up the next rise, straining and sweating until the old man on the horse passed us, once again leaving us behind. On the next downhill, we passed him again. Then he passed us. And so on.

Perhaps this went on for the next hour, the hilarity rising until at each successive passing we -- the old man, my dad, and I -- were sharing a chuckle and a wave and a halloo, old friends bound together by the absurd humor of this intersected moment in our slapdash lives. What had been an interesting-but-taxing end to another motorcycle ride became a story... a Memory. Exactly the sort of thing for which my dad invented Saturday Adventures in the first place.

You can tell a lot about my dad from that story. His love for his children. His flair for life. His easygoing humor, and his passion for good stories. But like any story, it's only a fragment of a life... of a man.

My dad's a great man. He's been my dad my whole life, and this next Sunday, he and my mother celebrate their Fortieth Wedding Anniversary. 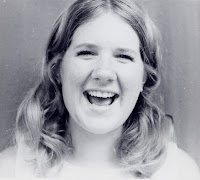 My mother, as anyone who's ever met her will tell you, has a life-zest all her own, and that rare and precious mark of wisdom that is her ongoing silliness. My mother is no longer the beautiful young girl who walked an aisle with a man in an unintentionally-hilarious, pale-blue tux. She is now a beautiful woman, respected and honored and, yes, giggled at in her community.

A few months back, I got an out-of-the-blue phone call from an old college pal -- a guy I'd not spoken with in over fifteen years -- who sometimes reads this blog, and had tracked me down to tell me I was "seriously f*cked up," and to wonder if I might spare him a little of my fairy dust as he attempts to snap out of his middle-class, status quo doldrums (because people are complicated and contradictory and amazing like that).

This friend found me by 411-ing my last name and tracking down my parents, whom he called to get my number. And the very first thing he said to me (before telling me how f*cked up I was) was that he'd talked to my mom for only maybe thirty seconds, but that he could tell she was an amazing woman, and he wished he could meet her.

This did not surprise me. This, you see, is my mom.

Sometimes her enthusiasms feel a bit eye-rollingly over-the-top. And sometimes I can't quite forget that my dad and I had a hilarious encounter with a man on a horse because my dad forgot to check the bleedin' fluid levels before taking me out for a three-hour motorcycle push under the hot, Amazonian sun.

But it has always been an Adventure, and I will always be grateful to have been a part of my parent's rich, story-filled life.