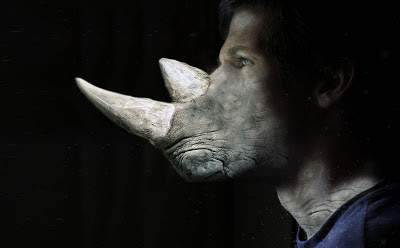 There was a time when doctors said that cigarettes were good for your body, and everybody just accepted this as normal.

That's how it goes. Today's health products are tomorrow's poisons... and vice-versa.

Since we live in a morality-by-majority culture, there's no way to know if today's standards are gonna last into tomorrow -- whether today's appropriate behavior is going to one day be considered a disorder. Remember how cool it used to be to be racist?

So... you've heard about "cutting," right? It's where people take sharp things and gouge into their flesh with them. They say it's a disorder. An affliction. An unhealthy way that some (many) teenagers in North America have begun to deal with the anxiety they feel in these disjointed times. We could talk all day about exactly why this addictive behavior is on the rise, but instead I want to talk about all the cutting that's going on that is not currently seen as a disorder.

I am referring, of course, to cosmetic surgery.

Americans spend roughly a bajillion dollars a year getting themselves cut up into new and interesting shapes... and I totally understand why.

In a culture so thoroughly obsessed with appearances, it makes sense to use your (copious) funds to get your nose re-shaped a little. If you don't look "just-so," after all, you'll have a harder time getting a job. Cops will give you bigger tickets, people won't think you're as smart, and (most importantly of all) how are you supposed to find someone to make the sexy-time with if you don't look like all the other cut-up-cut-outs we're all so obsessed with, amiright?

I, too, sometimes wish I was a little bit taller. Wish I was a baller. Wish I was more muscular -- more irresistibly handsome. I, too, have thought about the shape of my nose, and how it looks in profile. And though I'm famous among those who know me for my near-complete lack of fashion "sense," I'm still pretty careful during my once-in-a-blue-moon thrift store forays to choose the shirt that I think looks "cooler."

We're all the same, and no one who's ever put product in their hair has any right to judge anybody who's had a boob job.

A problem that no amount of rhinoplasty will cure. Because while artfully arranging myself is NOT a bad thing, the part of me that seeks value and love through something as frivolous as my meat-sack, and the fabric meat-sack-coverings I choose to wear is a disease. The part of me that judges others by these things is a disease.

We don't need to be cutting ourselves to look "better," or "cooler." What we need to do is to figure out how to love each other better, without conditions attached.

You know what we should do? Instead of obsessing about silly, intangible things that fade and disappear long before we do, we should agree to love the true beauty that lives inside of EVERYBODY.

We should agree to give lots and lots of hugs (and back rubs, and cinnamon rolls).

And then -- when we all feel so full-up with love that we're no longer interested in paying people to cut into our bodies -- well, perhaps then we can use some of that bajillion dollars we've saved to do things like, oh, ensure that everybody's got food on their plate and clean water in their cup.

Perhaps then we won't be so obsessed with being at the top of the imaginary heap, and we will stop killing each other (in organized and un-organized ways), and just start BEING... together.
Labels: consumerism identity