On May the Second, Two Thousand and Thirteen, representatives of the Duke Energy Company used a backhoe to cut a trench through our yard and, consequently, the Internet Cable. By some fantastic confluence of the Universe, this was very nearly the exact moment at which the ants living in the phone box decided to sever the final strand of metal connecting my telephone to the outside world.*

And I -- thrust suddenly back through time to the Cro-Magnon past -- experienced just the sort of post-apocalyptic anxiety I like to smugly deride in those whose smart phones have died in front of me. I'm in the middle of a run-up to the launch of a Kickstarter campaign for my short film, LOCKER 212, and I was panic-stricken at the thought that The Director might be unable to reach me, or I'd be unavailable to "like" someone's comment on the new LOCKER 212 Facebook Page. 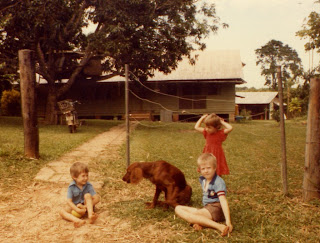 This lasted longer than I care to admit, when suddenly I remembered that once-upon-a-time, in the not-so-Magnon past, I lived in a world where the internet did not exist, and not only did I not have a cell phone, but I also didn't know cell phones were possible. Years later, when I did learn about their existence (but still didn't own one), I spent my summers tree-planting in the wild woods, where my only contact to the outside world was on days off through a cracked, graffitied pay phone at the 7-Eleven in Podunkville, British Columbia.

I remembered this time as the existentially-grounded experience that it was, and wondered at how I could have become so emotionally linked to this thing... this glowing-faced circuit-box.

I shut down the computer, and went outside to weed my garden. As I did, I felt a growing sense of melancholy for the generations of urban, suburban, and even rural children being squeezed out the birth-canals of the today's world. These kids will have no such analog-memories to which they can refer in an apocalyptic crisis such as the one that I was forced to endure from yesterday noon until ten o'clock this morning. These kids are linked, at the spine, to The Machine.

This reminded me of a story I wrote in My Book, in which a young Peruvian tribesman rages against the dying of his way of life, and how it seems that always and forever this "progress" of ours keeps finding itself complicit in the destruction of something beautiful. I wondered why it's so inevitable that the world of oil, machines, and technology has to conflict with such things of intangible, illimitable value as the un-tickable flowing of the Time-River, and the slow breathing of the trees.

I thought of the beautifully-tragic video I've posted below, where a young Peruvian film-maker had to go to Norway to begin to appreciate the beauty and value of the wild, un-paved world... before he could stop seeing nature as just a resource to be stripped, violated, and discarded.

I grew up in that country -- Peru. I ran barefoot through between those trees, never thinking of what an untrammeled jungle might mean, or the possibility that we might stop this techno-complicit, adversarial relationship with the world that sustains us. Can we stop? Can we re-direct, and find a way to use our power for something other than domination, destruction, and control? Can we stop turning this world into a parking lot, and start shaping it into the garden that it could be?

Later in the afternoon, my son showed up. He's only five, and doesn't have a cell phone. Doesn't go on the internet. He, at least, is still in the thrall of the forest. In him, there is hope.

*Apparently, the Duke Power guys also cut the phone cable. Which just goes to show you... never trust your father when he blames horrific violations on the natural world.