sell yourself, sell your soul 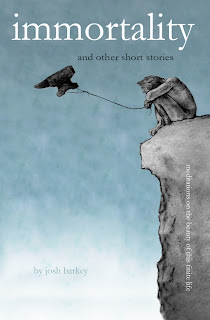 My first business venture was pizza.

I made pizza from scratch and sold it to missionary families on the missionary center where I lived in Peru, South America. I had a tall white baker's hat I wore, and my mom would give me rides on the back of her 50cc Honda scooter for deliveries. Picture an undersized fifth-grade kid balanced on the back of a motorcycle, trying not to drop a pizza.

For marketing, I placed an advertisement in "The Center Scoop," a two-sheet informational paper that I would go on to edit, design, print, collate, and distribute in high school. An auspicious beginning, wouldn't you say? The sort of nonsense usually printed up in Forbes Magazine as the back-story to the latest capitalist "success."


But I hate selling.

After the pizza business, I never really tried to sell anything in any organized way. And later in life, when people at one time or another desperately wanted to buy my paintings, I often hemmed and hawed on the price until they went away.

So now I have this book, IMMORTALITY (and other short stories), and even though I think it's worth the price, I absolutely hate trying to sell it. Why?

It could be, in part, because a lot of my writing pushes back against the excesses and damages wrought by the capitalist endeavor. When you build a financial system by fabricating need and pandering to the worst in people, ugly things are gonna happen. But I believe in art, in books, in making. I believe they are worth supporting -- even financially.

Am I worried about the squirrels that could be displaced in the name of my writing?

Possibly, yes... but I know of trees being mulched up in the name of much worse writing than mine, and having personally hand-planted around a half-million of the little, green oxygen-farms, I suppose I've done more than most to earn that right.

So why? Why do I feel like throwing up every time I read through another internet compilation of reviewers I can submit to? Is it insecurity? Fear of rejection? That couldn't possibly be it, of course, because I've never been insecure about anything, ever (insert sarcasm font, here).

My tendency is to pull the artist-card and just say, "It's not in my nature." But if I want to keep doing what I love, I'm going to have to learn how to sell, whether it comes naturally or not.

I've got a better idea -- why don't you just do the work... just make it easy for me by buying my book. If you love it, leave a killer review on Amazon and post a link to whatever form of social media currently rules your life. If you hate it...? Well, you won't hate it. You just won't. Some of my stories may annoy you, but they're delightfully written.

Because I'm good enough, I'm smart enough, and, doggoneit, people like me.

Now, pardon me while I go throw up.