A life without regrets is hardly worth living. 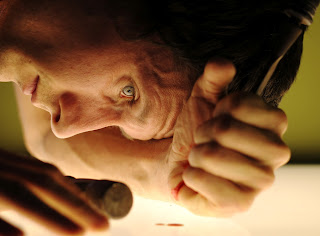 If regrets are things you would change if you could, then no, I don't have any of those. I've read too many time-travel stories to wanna go back and mess with causality. It is what it is, and what it is is good (even, perhaps, when it's not).

I define regrets not as emotional baggage, though, but rather an honest appraisal of past experiences that says, "Yep... in an ideal world, that woulda gone down differently."

Take, for example, a regret I have from a parent-teacher conference I conducted whilst still earning a living as the lowly minion of the overlords parents of the southern-Charlotte private school art students I was ostensibly teaching. In this meeting, I listened as the balding, rounded father of one of my beautiful, talented young female students told me that he and his wife didn't much mind their daughter pursuing this "art thing" with her free time or in college, since her role in life would be to find a man, marry, and be an incubator for a whole lot of grandbabies.

She was fourteen at the time. Fourteen, and one of the best young artists I had ever seen.

I sat there and I blinked. Uncomprehending. Unwilling to say what should have been said.

That is a regret. I guess I honestly wouldn't change it if I could, because not saying what should have been said kept me in my job a few more years, and allowed me to have more time influencing that man's daughter. But even so, I can write a blog post that explores how it would have gone in my ideal, alternate world.

This then, is what I should have said, as I rose from my chair with a violent, prophetical flapping of my arms:

"You, sir, are being a dummkopf! And I can say that to you -- in good conscience and without fear of reproach -- because despite the fact that you earn your living as the leader of a Protestant, Christian church, you are nonetheless behaving like an dummkopf of Biblical Proportions, and it is my God-ordained responsibility as a pedagogical-shepherd of your young daughter to wave my arms and declare that you must stop this nonsense!

Not for your own sake -- no! It is most likely, having reached your age and position with this sort of barbaric thinking intact, that you are beyond my powers to persuade. You believe that a woman is nothing more than her reproductive organs and a pair of (primarily milk-producing) breasts? ... well, fine!

Or... not fine, but at this point I doubt there's much I can do about it.

What concerns me, sir, is the fact that you have convinced your daughter that this is all she can do or be with her life -- that her talents in visual art are an amusing little past-time (like needlepoint for a medieval lady) to be tolerated only for their ability to distract her from anything that might keep her from her Ultimate Purpose as a Human Being... which is to make and rear children so that a human being who happens to have a twig-and-berries between his legs to do whatever it is that he wants to do.

Perhaps, sir, I've got you all wrong. Perhaps you don't really believe any of this hogwash at all, and are merely spouting it because you've noticed that your daughter has a mind of her own, and you're terrified of what might happen to her if she rejects all the things you've tried her whole life to teach her -- even the good things.

To which I say, you should be afraid! Because your daughter is a person. A fully-human creature with the same sort of awesome potential of any other human being, be they possessed of their own set of frank-and-beans or not. And no matter how hard you try to cram her into this box of your own imagining, bits of her are always going to leak out.

You will never own her soul, because it is not yours to own. All you'll do is saddle her with an inheritance of fear.

It's scary, I know... but here's the Good News! You don't have to do this. You can let her go -- allow her to become whatever sort of person it is that she was born and gifted to be. You can be free of this awful, terrible, crippling burden of fear that you are oh-so-obviously lugging around.

If you do, she may nonetheless end up marrying, staying at home, and giving you wheelbarrows full of grandbabies -- an honorable and powerful legacy and path for any woman to follow, to be sure. But even if she does, that will still not be all that she is. It will never be all that she is. She is your daughter, but she is not your property. You did not knit her together in her mother's womb, and you do not know what she might become. It is not your job to know. It's your job to love, nurture, support, and let go.

So again, sir... stop being a dummkopf."

That is what I should have said. Would have said, I suppose, if I wasn't such a coward, myself. Such a little dummkopf.

Live and learn, I suppose. Live, learn, and carry your regrets into a wiser future.