You're supposed to think of Artists with a capital "A," off in their ivory towers having eureka moments that they will ultimately rain down on us other, lesser mortals.

But this is not true, because we are all Artists. And all of us -- even those fortunate enough to make a living doing something that society has called "Art" -- often feel that if there really is a category of uber-humans called "Artists," then we are not actually worthy to be counted a part of it.

Let me say that again: All of us are Artists, and all of us often feel like we are not.

That, I suppose, is one of the reasons why I like writing screenplays so much. There are no ivory towers in Movie-Land. There can't be, because it's practically impossible to make a watchable movie all by yourself. So movies are made by committee, or better yet, community. The pressure is off to be more-than-human, and each individual involved with film-creation can focus on being the best Artist possible, within their given discipline.

By seeking out other like-minded and creatively-driven people, an individual can achieve far more than he or she could ever on his/her own.

I'm in the middle of my fifth feature-length screenplay right now. I've written over a dozen short films. And I have yet to write anything completely on my own. I've relied on talented and creative people who both respect my work, and want to help me make it as good as possible. The beauty and the joy of it is that it isn't about me at all -- it's about the movie. About making the best possible version of the story that I can.

This, I think, is the way we're wired to actually think. This is how the brain best works. Not with a false, puffed-up sense of any Artist's individual ability, but rather with a communal momentum toward the greater purpose... the greater good. 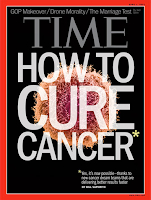 This week's TIME magazine cover story is entitled "How to Cure Cancer," and tells how some concerned movie-making people in Hollywood dumped a bunch of money into the cancer-research world. They ended up changing the pride-driven culture of that world into a more team-driven way of thinking.

By launching an organization called Stand Up to Cancer (SU2C) that attacks cancer "the way you make a movie: bring the best and most talented possible people together, fund them generously, oversee their progress rigorously and shoot for big payoffs--on a tight schedule [because artist's need deadlines]."

It's worked. They're making progress. Things are changing rapidly, and the cancer-research culture has begun to shift away from being tragically focused on "Who gets to be the Nobel Laureate?" toward actually doing what it's supposed to do--find cures for different cancers.

I love this. I love that The Artist's Way has left the periphery and is now being used to attack Big-World Problems that had seemed insurmountable.

Let's do this everywhere!

Instead of continuing to allow the generals and lawyers who traffic in power and violence to run the world, how about letting the Artists have a crack at it?

Let's all be Artists, instruments of Making and Healing for a broken world... together.
Labels: art community work