My friend Austin the Director hates it when I use my phone to call him. Phones are for texting, apparently, not conversation. If he can be bothered to answer his phone at all, it's usually to express his annoyance because by now he knows that I know that he doesn't want me to call him.

But I don't care.

I think he's being stupid, so I call him anyway. And sometimes when he doesn't answer, I'll even leave him a voice-mail. Because I'm stubborn. I know he'll just note that I've called, wait until it's convenient, and call (or text) me back to ask what I wanted... but who cares? I'm right and he's mean. So there.

Did I mention how much I love Austin Herring?

I do. I really, really love the guy -- bless his heart (that's the official Southern phrase you tag onto something mean to nullify the fact that you were wrong to say it). It's not just that he directed the first short film I ever wrote, FORK; and it's not just that he reads through the horrible, early iterations of all my screenplays and offers me insightful, helpful, incredible notes... he's also a genuinely great guy, with whom I really, really love to spend time.

He had his soul sucked out of his body when he succumbed to the temptations of an apple (an apple iphone, that is)... but is that really his fault?

He's about five years younger than me, which makes him pretty much a little baby worm-child. So it's not his fault he can't really remember a time before the internets. It's not his fault Steve Jobs rewired his brain into a state of cultish dependency -- to a state where he's incapable of envisioning anybody unwilling to enslave himself to a chunk of well-designed technology.

He is sincere in his belief that I am the weird one. That on this planet of seven billion people, it is he who is normal. Being so dependent on this technology for his sense of identity and well-being, he has come to believe that being tethered to a smart-phone is actually a human being's more natural state, and can no longer understand how anyone ever survived without one.

Lest your laughter be too cruel, however, let me assure you that Austin is by no means alone in this delusion. On the popular dating website OKCupid, one of the standard profile questions is to list "Six Things You Could Never Live Without," and I would estimate that approximately ninety percent of the women on there have their phones listed as one of those things -- often the first. While I've not spent any time browsing the men, I'm guessing the numbers are comparable.

Yesterday, one of these hipster phono-philes posted a piece to the New York Times website that was elegantly entitled "Disruptions: Digital Era Redefining Etiquette," in which he whined about how annoying it was when people left him voicemail messages, called rather than texted, asked him a question they could have answered with google, and otherwise wasted his time. He went on to proudly proclaim that though his dad is still obnoxiously persistent in his calling and voice-messaging, he'd managed to train his mother so that they now communicate primarily through twitter. 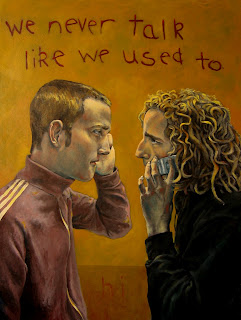 If you couldn't sense the sarcasm in what I just wrote, that's because I was writing it. Most communication, as any 8th-grade socials student can tell you, is non-verbal. Yes, I know that a lot of it is body language, which isn't going to carry over the phone, either (a solid argument for getting off your butt and actually spending time together, in person). But a lot of it is also intonation, and silence... aspects of communication that it takes good writers whole lifetimes to learn how to emulate through the use of words alone. And these writers are only ever partially successful, dependent on such unfortunate and limited literary techniques as italics, hyphens, ellipses, and thesaurus-trawling.

The point of all this technology is not careful, nuanced, thoughtful, Other-centric communication, after all. The point is speed. The point is Self. And in that context, the thought that anyone would take the time to really slow themselves down to the pace necessary for real, inter-human communication is just absurd. Do that, and you might miss the latest antics of that cute little singing, dancing boy. You might miss something important.

Nonetheless, good communication is about meeting in the middle. About accepting the annoying, vapid, de-humanizing ways that your friends insist on "communicating," in order to be able to continue to interact with them in as loving a way as possible, bless their friggin' hearts.

I will therefore continue to use my Google Voice account to send Austin text messages, so he'll feel that my lack of a cell phone doesn't mean he has to stop being my friend.

Because I love him: no sarcasm-font intended.
Labels: culture technology writing