the words will go on 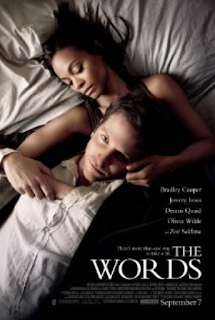 Have you ever thought about the necessary role of anxiety in your life? Not that it needs to be there... just that it IS there, and that for your own mental health, you ought to stop exerting so much energy trying to avoid it?

I've been thinking about it a fair bit, lately. It's not that I'm a gibbering, nail-biting looney (although I have been a biter for coming up on thirty years, now), it's just that a lot of what I do seems to be leaning heavily toward some fictional future "reality" that I imagine will be somehow "better" than what I've got right now - which is, as I well know, patently ridiculous.

I watched the film THE WORDS today. It got hammered by the critics; but a screenwriter I respect recommended it, so I thought I'd give it a whirl. It wasn't exactly gripping, but I quite liked it.

I wonder if perhaps that's just because it's largely a film about writing -  a film that delves deeply into the sort of writerly anxiety and self-doubt I deal with on a regular basis: Will I make a go of it, professionally, or am I deluding myself? Am I exchanging the chance to truly live for fripperies - for a fictional world that, despite my best efforts, will never quite make contact with reality? I want to write movies that one day get produced and make you cry and laugh and think and grow - yes. But if I don't do that, will I end up with nothing but a legacy of fear-that-I-wouldn't... that I don't have enough love in me, and that it's all just another elaborate fiction I'm trying to write?

I do not know.

I do know that I'm anxious a lot, and that I don't want to be. I want to keep making artful word arrangements, but I also want to make a little love. I want to give JOY to the people I touch: family, friends, a someday lover... my son. Dangit, I don't want my legacy as a father to be a history of blog posts and youtube videos that fools everybody but him into thinking I'm a wonderful, attentive, creative father.

I want to live NOW.

I want to make that love NOW.

I'm more than likely to post this to my website and then go right on working insanely hard (and I do mean insanely) to avoid my anxiety. But I gotta tell you... the dopamine spikes just aren't having the effect they used to. The Fairy Tales I've been telling myself are losing some of their shine.

Let's see what the internets have to offer...