Raiders of the Lost Story Conference 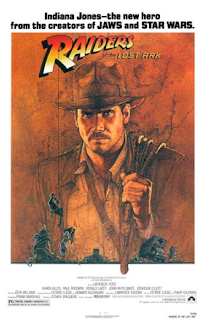 In the latest episode of the podcast Scriptnotes, John August and Craig Mazin departed a bit from their usual fare and spent the whole hour(ish) dissecting the movie RAIDERS OF THE LOST ARK.

At one point, they referenced the recently-semi-famous Story Conference for said movie held by George Lucas, Steven Spielberg, and Larry Kasdan (the screenwriter). You could probably write a grad thesis (or seven) on what this conference has to teach the rest of us about creativity in general and beating out a screenplay in particular; but since I didn't get into this gig to be a frickin' academic, I'll just hit you with a few quick thoughts from my reading of the transcript of those sessions.

The first thing I noticed was that George Lucas is not the idiot his recent violation of the STAR WARS series has lead us all to believe. RAIDERS OF THE LOST ARK is largely his baby, and he is clearly the one guiding the discussion, shooting smart ideas left and right. Spielberg and Kasdan are likewise not idiots (in case you were wondering), and I was thoroughly impressed with the general intelligence-level of the whole thing.

That's not to say that Lucas and Company didn't toss off some ridiculous, cliched ideas, as well. It was a brainstorming session, after all, and one of the essential ingredients of creative thought is the ability to be loose with your ideas--free to vomit out whatever comes into your head, good or bad, without judgment. First Ideas are rarely practically never Best Ideas, and it's intriguing to listen to these guys take all the pre-work they'd done and gradually talk their way toward what would eventually become the classic film we all know and love.

This wasn't by any means easy or inevitable, even for them. As I watched them work their way toward the idea of the Staff of Ra, for example, I wondered if they were ever going to see such an obvious story solution... and I cheered a little when they did. But that's just it--it's always like that.  The right creative solution always seems simple in retrospect, after a whole lot of the wrong ideas have been expressed and, eventually, discarded.

I was also intrigued by the persistence of some ideas that seemed blatantly, obviously bad. George Lucas, for example, obsessed for a long while over the idea of taking Indy to Shanghai in order to show him interacting with some ninjas--perhaps defeating them with his own special brand of Kung Fu. Spielberg took that hot potato and kicked in his own ideas, and while their erudite verbal exploration of the historical conditions in Shanghai at the time is intriguing, the idea seems laughable from our privileged position of having seen the finished piece.

The impression we ultimately get is of three really smart guys who weren't afraid to say ridiculous stuff as they worked their way toward something Lucas referred to repeatedly as "Keeping it Clean." I think the most essential lesson to be learned, here, is to cut yourself a little slack in the planning period of any creative endeavor--to remember that having a bad idea or two (or six hundred) is all part of the process of arriving at a good one.

Oh, and that Harrison Ford is the man. Of course.
Labels: film writing