A Time for Questions: the controversy of ZERO DARK THIRTY. 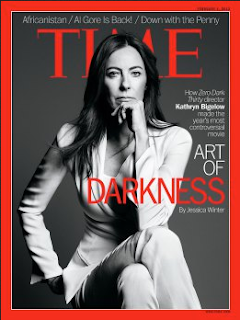 Would you personally torture a man if you knew for a fact that he had the location of a bomb that would otherwise kill a lot of people? What if one of those people was your kid? What if, on the other hand, you only thought he knew; or what if it wasn't a bomb, but rather a cache of electronic components that could potentially be made into a bomb?

What if he was just a jerk who made you fill out dozens of pointless TPS reports on your day off?

I guess what I'm asking you to consider is this: at what point would you be willing to torture another human being for information? Not in some abstract way, but rather right now, with this pair of pliers I'm about to hand you.

The recent film ZERO DARK THIRTY asked that question and as a result, director Kathryn Bigelow just made the cover of TIME magazine. I'm guessing it's pretty rare for a Hollywood director to make the cover of TIME, and rarer still for it to happen over one, recent film. But there it is: a six-page spread by Jessica Winter boasting the sort of superlative language you'd expect from one of today's desperate-for-significant-experience teenagers. "The most politically divisive motion picture in memory," the author gushes, not bothering to provide us with a contrasting example to prove that she does, in fact, have a functioning memory.

Faced with such enthusiasm, I have to remind myself that it isn't about providing news and raising important questions... it's about selling more thneeds.

Winter's article, however, claims that the reason for all this broo-ha-hah is that the film "creates the strong impression that the enhanced interrogation techniques that were part of our former detention and interrogation program were the key to finding Bin Laden;" and then goes on to quote various authorities either confirming or denying the validity of such an impression.

It seems to me like a stupid argument, since intelligence is built on a web of small bits of information. Trying to separate out for condemnation the bits gleaned from "enhanced interrogation techniques" would be like trying to figure out what, of all our present-day medical advances, we should abandon because they're at least in part dependent on lessons learned from the reprehensible experiments conducted on Jews by the Nazis of the WWII era.

It can't be done.

And yeah, that makes me feel icky. But it's a sometimes-icky world; and until we face the fact that it's an ickiness that reaches down into every human heart and implicates us all, we haven't a hope of healing, or moving to a better place.

I'm gonna have to go with Bigelow and Boal (the screenwriter) on this one and say that they're right to claim both creative license, and journalistic integrity; because the truth of what they're saying with the film shines through -- that if we're going to cheer vicariously and cathartically at the death of another human being, we ought to think long and hard about what that says about us as human beings.

I've written before about my reaction to the initial killing of Osama Bin Laden, and to the creative re-imagining of that killing on the show THE NEWSROOM.

But I think Bigelow, Boal and Company have now given us a much better, more human creative exploration of the event.

By providing us with an onscreen surrogate-protagonist in the person of Maya, played by Jessica Chastain, they've brought us on an emotional journey that in our received experience links the torture to the killing -- in essence forcing us to ask ourselves the difficult question I posed at the beginning of this rant.

That, I think, is where the controversy lies. Not in the relative factuality of the Bigelow/Boal account, but in a very difficult question about ourselves -- a question most of us would rather not face.

Perhaps with the detachment of a newsreel-viewing, it is easy for us to cheer our approval of the killing of a man and much of his household; but ZERO DARK THIRTY has placed us right there, in the moment, so that it is us who killed men and women in front of their crying children. It is us who tortured a man for weeks.

This is ugly, yes. But it should be ugly, and difficult, no matter what our ultimate conclusion about its necessity, or lack thereof. If we don't find it ugly and difficult, then we need to allow ourselves to ask, "Why?"

The final purpose of a good film is not to relate facts. It is to tell the truth and thereby raise important questions about the human experience. And while I'm willing to grant Bigelow and Boal the benefit of the doubt on the general factuality of their account, I think that on the far more important question of truth-conveyence, they've dropped the bomb right on target. Questions are being asked, and the conversation has been ignited.

It's time we join the artists in rolling around in hard questions -- time we stop shooting them every time they ask us one we don't like.
Labels: art film war