Give a Little Whistle

Grandpas lie so much, it's hard to tell when they aren't pulling your leg.

So, when Grandpa Joe told my brother Jo-Ben and I that he used to catch gophers by placing a string-noose over a hole, crawling back, and whistling 'til one popped up*... well, you can understand why I had my doubts. Jo-Ben and I were still debating the point an hour and a half later, when we were lying side-by-side on the end of a string up on Nose Hill in Calgary, Alberta... whistling.

"We've been here foreeeever already," I said, "and I'm getting hungry."

I was eleven years old - tired, hungry, and a little wind-blown. I held out a little while longer, then started off down the hill.

Now, Nose Hill isn't just some backyard bump -- it's got an elevation gain of 349 feet. Going up and down that thing was something of an event for a kid like me, but I was almost to the bottom when I heard my brother shrieking out behind me,

I turned and saw him bounding down the hill, one arm stuck out ramrod-straight in front of him. From the string in his hand, dangling by (I kid you not) TWO TOES, was a squirming, spitting-mad little gopher.

Jo-Ben skidded to a stop, bursting with pride, but obviously straining to hold the thing up off the ground. When I asked if he wanted me to carry it a while, he swung it away from me and kept on walking. We were almost back to Grandpa Joe's house, and there was no way in Helsinki he was gonna let me steal his moment.

The year I quit the Great Gopher Hunt was also the year I whined my way out of piano lessons. I loved to sing and everybody always said that of my siblings, I had the best ear-and-voice combo, so they figured I was going to be the one with a lifelong passion for music. But the lessons were hard and I wanted to quit, so I did.

In high school, I quit guitar lessons twice and banjo lessons once, and I think the only reason I didn't quit drawing and painting was because for me, those were easy. I want to soften that by making the argument that quitters are just people lacking the imagination to envision a future on the other side of a whole lot of work, but I think for me it was just good, old-fashioned laziness.

Quitting's a dirty, lazy habit, and I had it bad.

Then I went industrial treeplanting in northern Canada.

If there's one job a quitter shouldn't do, it's industrial treeplanting in northern Canada. I'm pretty sure there is no more hellish summer employment to be had for a white-bread little cracker like myself. That foreman should never have hired me. My brother Jo-Ben had gone out the summer before, though. His cussedly-stubborn, no-quit attitude had stood him in good stead, and his good reputation got me my shot.

By some miracle, I didn't quit.

The fear of familial shame and massive college debt-load kept me from throwing in the towel when the black flies were crawling up under my eyelids and the hail was falling and I was collapsed, vomiting of heat-stroke, under the suddenly-blazing Alberta sun.

Instead, some latent Barkey Gumption kicked in and I was able to shake my fist at the sky and rise up to become the highballing, tree-pounding monster who earned his way through college and started to believe that maybe his momma was right -- that maybe he could do anything he set his mind to.

Old habits die hard, though, and when I started hiring and foremanning my own treeplanting crews, I was only partly talking to them when I lectured that "There are two ways to quit. One is to pack your tent, chuck your shovel off a cliff, and buy a bus ticket. The second way to quit is to come out here and only give part of who you are. But if you're gonna be out here suffering through the bugs and the weather and the endless, grinding fatigue, pain and torture," I'd say, "you might as well be all in."

I don't think anybody means to be that kind of quitter. 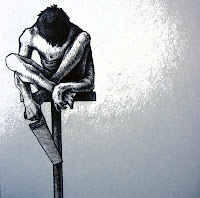 I think maybe we just get to feeling that whatever it is we're striving and sacrificing for isn't ever going to materialize. We had faith in some imagined future reality and we were working to make it real, but somewhere along the way our hope wavered. We let our fear lead us to the easier path - to the Land of our Best Excuses, where we stopped making something of our Time and our Selves, and instead started killing time at some job, just so we could go home and kill time at some other mindless, useless entertainment.

Don't get me wrong -- I've got nothing against entertainment (when there's a little mind added in). After all, I'm trying to make a living writing entertainments. But all too often I have sat down at my desk to write and gotten overwhelmed by the fear of my impossible task of World-Creation. I wake up a half hour later to find a history of Facebook clicks and the sick feeling of having wasted a few more precious moments.

Tree planting taught me that my mind was both my greatest asset and my greatest betrayer.

I want to live without fear. I want to write an Oscar-winner, play my uke like an Asian Wizard, and catch a gopher by the toe. 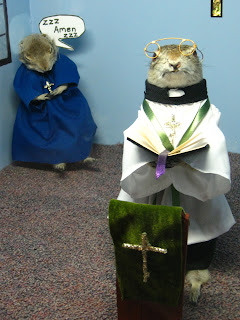 *In case you're wondering why anyone would want to catch a live gopher, the answer is simple: astonishing, forward-thinking business acumen.

See, when my Grandpa Joe was a kid, the local Farming Commission (or whatever) thought the best way to take care of their gopher scourge was to pay a bounty of something like a nickel for the tails.

My Grandpa, being an enterprising fellow, quickly realized that the better he did at collecting gopher tails, the harder his job would get. So instead of shooting the dad-blamed things, he started catching them live, performing on-the-spot amputations, and releasing the gophers so they could go back, breed some more, and perpetuate his business.
Labels: work