The Swedish Atheist, the Scuba Diver and Other Apologetic Rabbit Trails: a review 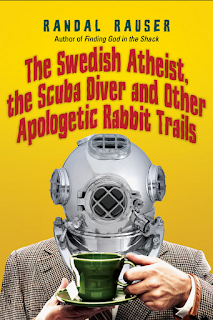 Evangelism usually comes across to me as an expression of fear and pride.

Perhaps it doesn't have to... but in my experience, that's how it usually gets played out.

By "evangelism," I mean the act of approaching another person or group of persons with the express intention of converting them to the very specific brand of Christianity you happen to espouse. The inherent assumption being that you (the Evangelical Proselytizer-Extraordinaire) are absolutely right in all you're trying to convert them to and that they (the Unbelieving Pagan) are absolutely wrong.

That may be a harsh way to put it, but in my long tenure in the Christian community, I've seen pretty much zero willingness on the part of most Evangelists to allow for the possibility that they could be wrong in even some of what they're trying to push...  which seems to me to be a bit of a presumptuous approach for itty-bitty little humans.

While the ostensible purpose of this act of evangelism (saving someone from being tortured forever by God... or demons... or their own dang-fool self) is theoretically altruistic; the rootedness in fear (of hell) and the pride of capital "K" knowledge that this sort of thing implies makes me intensely nervous.

Some people take it a step further, with something called "apologetics."

In my experience, Apologetics is undertaken as a sort of Weaponized Evangelism.

The idea being that, instead of gently persuading someone that you're right and they're wrong about God, Jesus, and the Universe, you attack their ideas with blunt objects, bludgeoning them relentlessly until they've no choice but to convert under the awesome power of your vastly superior intellect.

It's no wonder that America, the land of Shock and Awe, is such fertile soil for exactly this sort of violent, fear-driven, prideful apologetics.

As I said at the outset, though, it doesn't have to be. You can talk about your faith -- one on one, and to larger groups -- in a way that is loving, humble, earnest and kind. And you can sharpen your apologetic tools so that you'll be able to present an answer to challenges to your faith that is not only intelligent and loving, but also even fun.

I'm not much of an apologist, myself, but I think you couldn't do much better than to follow the example of Randal Rauser* in his book, The Swedish Atheist, the Scuba Diver and other Apologetic Rabbit Trails.

In the introduction, Rauser uses a progression of "apologetics" definitions to describe his journey from the sort of thing I've been decrying to something gentler and, I think, more loving:

One: "Christian intellectual warfare with non-Christian belief systems that utilizes the weaponry of sound argumentation."

Two: "The discipline of making converts to Christianity through the use of argument and evidence."

Three: "The rigorous pursuit of truth in conversation."

The rest of the book, which uses a sort of modified, coffee-shop Socratic method, does just the latter -- rigorously pursuing the truth through an imaginary conversation between the author and a young atheist named Sheridan.

Atheists may object to the characterization of Sheridan as particularly angry and bitter, but given that a lot of atheists are very angry and bitter (often justifiably so) about some of the truly wretched things that have been said and done in the name of Christ, to me it seems an honest approach to take.

Randal-the-Narrator, while freely admitting his own emotional response to some of the more pointed attacks on his faith, manages to nonetheless keep his sense of humor and meet Sheridan halfway. At the end, Randal turns to us (the Reader) and says...

"This was a real conversation, wasn't it? Sheridan challenged me several times. More than once I don't think I had the best answers for his questions. If I could do it over again, I'd probably say a few things differently. He certainly pushed me to keep thinking. The problem of evil, genocide, hell, prayer, religious pluralism and truth--these are all issues I'm going to keep wrestling with. And that's okay. Remember, the conversation isn't about winning a debate. It's about moving toward the truth. And I dare say that we've all taken some steps in that direction today."

I agree, and I think The Swedish Atheist, the Scuba Diver and Other Apologetic Rabbit Trails is a perfectly lovely book... whether you're a Christian seeking to better understand some of the justifications and difficulties of your faith, an Atheist struggling to understand why so many "otherwise sane" people seem to be going in for this stuff, or just an outsider, wondering what all the fuss is about.

In fact... you should GO BUY A COPY RIGHT NOW.

*Full disclosure: I have two reasons to be biased in favor of this book. First, Rauser got his BA where I did, at Trinity Western University in BC, Canada (which explains the absence of the oxford comma in his title) and Second, because Intervarsity Press sent me this book for free, in hopes that I'd write a favorable review on this blog. We all know how ridiculous I am about free stuff, but I think I can say with all honesty that I really did enjoy and learn from this book, and believe that you will, too.
Labels: review