Everything I Know About Screenwriting, I (Kinda) Learned By Planting Trees 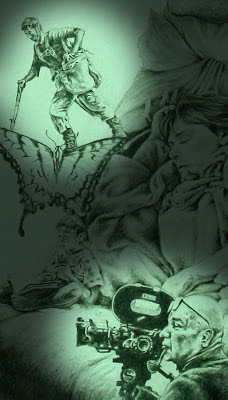 Why would anyone care what I have to say about screenwriting?

The first treatment I wrote for a music video was produced and went into rotation on MTV2. The first short film I wrote was produced and played a few film festivals. And I've read enough of the truly awful feature-length scripts floating around to know I'm at least a cut above average as a writer in LaLa Land.

Despite all that, though, my credibility as a screenwriter is pretty much zero.

Screenwriting as a job market is just too glutted. Last year only around thirteen hundred writers reported any income to the WGA, but every week I listen to a screenwriting podcast that boasts over a hundred thousand listeners -- and that's just one podcast!

Why would anyone take the word of a guy like me?

Why would anyone want to listen to my stories?

As a screenwriter, I have no good answer to that question. Telling you I'll make your wildest story-dreams come true makes me seem like yet another campaigning politician, and I think we've had more than enough of that for one season. So instead, I'm going to go back to something at which I was once a Rock Star -- Industrial Reforestation in Canada.

For the uninitiated, Industrial Reforestation is one of the most physically and psychologically demanding jobs in the world. It's a piecework hell in which a good treeplanter maintains a heart-rate equivalent to a world-class marathon runner in action, and burns more than double the calories of said marathoner over the course of the day. Every day: rain, sleet, or hail -- for an ENTIRE summer.

In my day I was a very good planter of trees and then -- when I became a foreman/planter and eventually camp supervisor -- an even better leader of planting crews.

Don't believe me? Fine. Meet me in Northern Canada next summer, and we'll just see who breaks first.

Until then, however, I'd like to gift you with a few of the principles I learned from treeplanting -- principles that I think make me a better screenwriter.

Number One: Nobody Actually Ever Really Sleeps Their Way to the Top.

People hear about the great money to be had in treeplanting and so, because pain is never real until you're actually in it, they think it'll be a cakewalk to fat cash. The truth, however, is that no matter how awesome your mom thinks you are or how great your older brother was as a planter, there are no short cuts.

Sure, you could shake tent poles with the crew-boss and maybe score a sweet, creamy piece of bottomland (so to speak), but treeplanting is always hard no matter what piece you're on, and nobody else is going to do it for you.


As good as I came to be as a planter, I was one of the absolute WORST when I started. I made every mistake imaginable. But I would not quit. I would not back down. And when I started four summers later as a crew leader and found that in many ways it was a much, much greater challenge, I remembered what it had felt like to start in on an impossible task.

So I learned from my many, many failures, and kept on working.

Number Two: Even the Most Ridiculous Wiener on the Crew Contributes Something.

Nobody who saw me as a rookie treeplanter would have thought that I would one day lead the top-performing crew in one of the largest companies in the business. I weighed in at about a buck-twenty and my face was a permanent mask of utter despair.

But when the owner of the company pulled his truck over to holler out a question about what stock I was planting, he didn't see a first-week wiener not likely to make it, he saw a guy encountering real pain for the first time. He saw a person.

He got out of his truck, walked out, and spent the next hour and a half picking spots for me to plant -- making my life easier and (more importantly) making me feel like I mattered. Like I had something to contribute.

I remembered that lesson years later when, as a crew leader, I realized on the first day that I wanted to murder one of my new hires.

He was completely bonkers, never stopped talking, and planted slower than almost anyone else in camp. But I chose to love him as a unique person, and ended up begging him to come back the next year. Not because he ever became more than a decent, solid planter; but because watching the enthusiasm with which he performed Bohemian Rhapsody while re-planting naked all afternoon gave me one of the best laughs of my life.

I think I'll stop at two, because those two are about all you really need, to make a go of it.

Know that whatever you want to do in life -- whether it be treeplanting or screenwriting or competitive chicken-juggling -- you are going to have to work very, very hard to be your best.

There is no way you're going to get it right the first time. Or the fifth. Or the hundredth.

But remember that you have something no one else has to offer -- you.

Bending over more than half a million times to put trees in the ground left me with way less spinal-lube than when I started. It cost me summers at the beach, and made me far too tired for summertime romance.

But it got me through college debt-free, and taught me how to write. Because when I planted trees, I lived.
Labels: film work writing