on (maybe, maybe not) killing your kids

After six days of full-time stay-at-home-dadding (including a day and a half of watching somebody else's kid, as well), I thought I'd come back to the work of writing with a little piece on killing your own children.

Have you read the Alvin Maker series?

If not,  then shame on you for not completely absorbing the oeuvre of everybody's favorite Carolinican-Mormon storyteller: Orson Scott Card.

Do you feel shamed? Fine. Let us proceed.

In the first book in the series, there's this one part where this guy is standing there thinking about impaling his own son with a pitchfork, and I gotta tell you -- it resonates. The kid in the book is weird and difficult, sure, but the dude has no legitimate reason to kill his son (if that were even possible), and he feels immensely guilty at having had the urge to do so... but I know that I, at least, have certainly felt that incalculable, murderous rage (and attending guilt).

And I'd be willing to wager my last clean diaper that there aren't too many parents out there who've never felt the same way.

In the story, some mind-reader guy comes along, identifies the urge, assures the dude it's normal, and takes the kid away so he won't get shish-ka-bobbed.

But what about the rest of us, who don't have a kindly mind-reader guy to save us?

When my son was born, I was cornobbled, which (as everyone knows) means to be hit over the head with a fish. I believe the precise sounds that came out of my mouth the first time I held him were as follows: "Grrrk. Grrlb. Monkgln," which is to say that the second I saw him, I instantly knew that I would die for him.

Not just the sort of dying where the uni-browed villain points the gun at your son and tells him to make a body-bridge over the coal pit and you volunteer to go in his place, but the sort where the bus is coming up fast and without thinking, you jump out and push the kid out of the way, taking the grill-to-the-face yourself.

I would die for the kid, just like that. I wouldn't have to think about it. I'd just do it.  SWOOSH!

But then he got older. He got four-almost-five years old, in fact, and developed a personality and opinions and a raging desire to find every single button in my psyche and push it, just to see what might happen.

The knowledge that I'd die for him became more theoretical, and always implied at least a few seconds to think about it -- to screw up my courage for the ultimate, ennobling choice that I would no doubt eventually make, on account of my inherent awesomeness.

It became easier to admit that sometimes it feels like the right choice is to pick him up and chuck him against the wall, just to see what'll happen. Like, say, the time when I was writing and he wanted me to stop, so he came up with the uber-cool switchcomb one of my former students bought me and pressed the button when it was inches from my cheekbone and SNAP! I instantly had this searing pain and a horrific little bone-bruise.

In those times, the desire to die that he might live forever in his putrescent little obnoxiousness seems to somehow shrink and disappear. I still love him. And no, I don't really want to kill him. Not, like, in any particularly specific kind of way.

Nonetheless, it does get me thinking.

We'd all like to think of our emotional state as being somehow indicative of what's really going on. 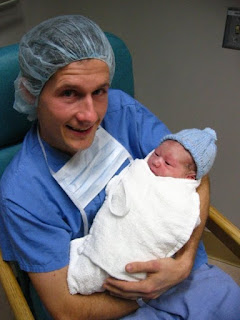 We'd like to think that because when our son was born we'd have set our foot on fire with a blowtorch if that was the only way to save him, it means we're good and glorious and honorable, imbued with all the virtue we'd ever imagined a human being might aspire to attain.

The problem comes in the middle of the night a couple weeks later, though, when a good night's sleep is a long-forgotten memory and we find ourselves listening to the little cherub's howls and staring wistfully at the open window of the third-floor nursery, thinking about trajectories, flight velocity, and a night of uninterrupted dreaming in a nice, comfortable jail cell.

It is then that we discover that emotions and instincts are perhaps not always our best guiding light.

They're useful, sure, because they can instill in us the emotional memories that may give us courage to do the right thing, instead of just what feels right in the moment. But they're not a particularly reliable peephole into ultimate truth.

Emotions only occasionally run parallel with reality, and they are so elusive and mysterious that you aren't likely to ever be able to tell exactly when that is. While it is clear that the mind divorced from the heart quickly becomes cruel and inhuman, the Mindless Heart is a fickle and duplicitous guide.

The mind and heart are forces that work best together, with love.

So if you're weighing him in your arms and contemplating how well he'll spiral, just remember that if you stick it out, eventually he will start sleeping through the night. He will grow big and become ambulatory. He'll learn to talk, and then to talk back. He'll become strong, then strong-willed enough to switch-comb you in the face.

You may not feel like dying for him, just now; but if you can manage to avoid killing him, love will get you through it. You will eventually remember that this is a miracle, this relationship you have been gifted.

You will remember, eventually, that relationships are always a gift, and that love is always the best guide you've got -- the best chance to meld your mind and heart, and get through parenthood infanticide-free.
Labels: parenting relationships