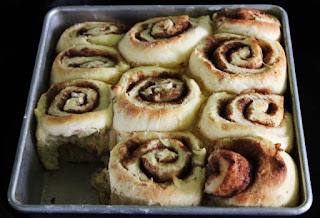 If there is such a thing as Original Sin, it probably has something to do with cinnamon rolls.

I'm not just saying that. I took a University course once where the professor told us that studies had shown that for men, the most powerful aphrodisiatic smell was the scent of fresh cinnamon rolls. And since some of the early theologians of the Christian church were obsessed with the idea that sex was the Original Sin, well... there you go.

That's why it's hilarious that I made cinnamon rolls for a church potluck, yesterday.

I got up, whipped 'em up, and then transported those pans of doughy sin right onto the plates of the congregants-formerly-known-as-faithful. Guerilla Baking. BAM!

I'm not writing to tell you about my iniquities, though. I'm writing to tell you about the first time I made cinnamon rolls, back in 2009. My marriage had just ended and with it, the bakestress I'd come to rely on for cinnamon-sugary goodness. But just because I wasn't with someone, that didn't mean I was not longer subject to the standard urges "flesh is heir to." A man's got needs, right?

I was excited. Nervous. Tense.

I had helped with the making of cinnamon rolls before - back in my my childhood - but this would be my first solo flight. The hour arrived. I carefully laid out all the ingredients, tacked up the recipe I'd printed out from the internets, and dove in.

Everything was going well until I got to the last ingredient - the flour. I added and added and added, but it didn't seem to be thickening up. I added more, all the way up to the full measure - four cups - but it was still a sticky, soupy, mess.

I decided to go off script, dumping in flour until it felt right. It worked, too... sort of.

It looked weird, but doughy. I pinched off a taste.

I'd like to think that was the exact moment I realized that my bag of flour was actually icing sugar. I'd like to say I didn't bumble along for a while after, kneading away at my big ball of sugar... but who knows? And who cares? I certainly didn't.

Instead, I picked up that ball of unbakeable non-sexiness and stormed to the door, marched across the yard, and hurled it over the fence, out off into the woods. Then I sat down on the moss at the edge of my yard and cried. And cried and cried and cried.

I'm not sure if this story has a moral, or a point. Maybe I wanted to remember where I once was, to make yesterday's cinnamon rolls taste all the more sweet. Or perhaps I just needed a reminder to slow down and pay attention to what I'm doing - to be in my moment, right now.

What's more likely, though (given that this is the internets), is that I'm hoping you'll see this picture of the sexy goodness of my sweet sexy buns and get jealous. You'll wish you were me and, in your envy and covetousness, somehow affirm me in my foolish pride. Because that, I think, is where Original Sin gets interesting.
Labels: food sex