Varieties and Illusions: Your Faith as a Crutch 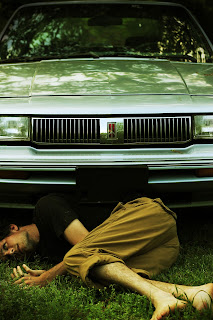 This will be a long post; but it will also be one of my most important.

I think I can say that without veering too far into egoism, because I won't be sharing my own ideas. Rather, it is my intention to pillage the book The Authenticity of Faith: The Varieties and Illusions of Religious Experience, in order to ask you to ask yourself some very, very important questions.

I don't care who you are or what your view is of religion, you should go read this book.

But, inasmuch as my small audience does not overlap with that of the author, Richard Beck, I thought it would be worthwhile - for you, and myself - if I were to go through and distill out some of the key ideas. They will, of course, lack the impact of a more thorough reading of the text; but I think they're important, and I'm willing to let you off the hook for the twenty-five bones it'll cost you to get your own copy.

If you can afford it, though, do.

Dr. Beck seems like a capital fellow, and a book represents hundreds of hours of work. He gives away a lot of free writing online, so I think it'd be swell if you'd buy a copy and help ensure that the man'll have enough money to afford to patch his coveralls and bike tires.

A quick disclaimer, though, before I begin: the book has flaws. Not, I think, ideologically - at least, I'm certainly not qualified to criticize it on that front. Rather, the primary difficulty I have with the book is in regard to the writing craft... something I am pretty good at. Basically, the dude needs a better copy editor. It's understandable, because copy editing sucks, and it is way easier than you think to create editing mistakes over the course of any larger work... which is why you're likely to find some, here, if you look to closeline enuff att this poste.

Still, I hope that in subsequent editions, they'll get the errors ironed out. They're annoying. That, and the academic propensity towards repetition (while probably useful in a pedagogical sense) could probably be cut back, as well.  Nonetheless... a most important read.

The short version is this:

Sigmund Freud wrote a book called The Future of an Illusion, in which he undermined the basis of all religious apologetics by arguing that all religion is wish-fulfillment... that faith is just an existential crutch people use to avoid facing the facts of life: that life is ugly and painful and we're all just destined to be worm food. If we grant that (and pretty much the entire New Atheist movement does, and quotes Freud extensively), then anybody who argues that their particular religion is reasonable can be disregarded, since their intellectual integrity will inevitably be compromised by the fact that they really, really want what they're arguing for to be true.

On the other hand we have William James; who, in his book, The Varieties of Religious Experience, argues that the issue is more complex - that faith is not as homogeneous as Freud would have us believe. James argues that while many people do use their faith as an existential crutch, there are those - whom he calls "sick souls" - who refuse to do so, and live instead in the inevitable tension caused by belief in an omnipotent, good God in a world full of suffering and death. These people, he argues, do not disregard the ugliness of the world, nor ignore the unsolvable questions presented by their faith tradition.

Both Freud and James used as their subjects the religious group most widely at their disposal - Christians. It is likely that their conclusions could easily be extrapolated more widely, but even if not, they nonetheless are of particular interest to Dr. Beck who (as a professing Christian and experimental psychologist) wished to discover whether empirical evidence could be gathered that would either confirm or refute Freud's sweeping claims about the faith.

Beck found it odd - given that Freud made an empirical truth-claim that ended up having such a profound effect on Western Society - that attempts to gather such empirical evidence had not yet been made. So that is what he set out to do.

Before I get to his conclusions, however, it's worth pausing to ask if Dr. Beck and his colleagues, as professing Christians, could be trusted to be unbiased in their research (assuming that Freud was right). The answer he gives at the end of the book is an honest, "no." This is why I love Dr. Beck's writing... both here and on his blog. He never seems to get quite so full of himself and his life-significance-projects that he's not willing to pause, step back, and acknowledge what's going on underneath.

Humility is one of the cornerstones of good science, and it's likely that it was a lack of humility that led Freud to sometimes exceed the bounds of empiricism and make sweeping statements about reality in order to confirm his own preconceptions (i.e. Christians are all just delusional dreamers).

Dr. Beck refers, early on, to Ernest Becker, whose Pulitzer-prize winning book The Denial of Death explores how everybody, not just the religious, live with a fear of death that acts as a psychological and cultural impetus towards creativity. We all want our lives to be meaningful, he says, and therefore we all create life-projects that are intended to imbue our lives with meaning: Freud, James, Beck, Barkey, and you.

These questions become very, very important these days, as certain life-projects (specifically, religions) are coming into greater and more frequent contact with each other. If the proponents of these religions are all just holding their respective faiths because they're scared to face evil and death without rose-colored glasses, then the existence of other religions presents a threat that is not just competition in the newly-opened free-market religious economy, but also a fundamental blow to their very significance and identity  as human beings.

If these identities are all based on fear in the first place, the only possible outcome of this is more fear... which, as we all know, leads directly to the dark side.

This would mean that religion itself is, as the New Atheists like to argue, directly responsible for a lot of the evil in the world. It's a question worth pondering and one which, Beck says, Christians ignore at their own peril.

It had been my intention to go through the book chapter by chapter, so as to give you the chance to evaluate Beck's arguments and consider the ways in which you might actually be conforming to Freud's stereotype. I don't think I will... for two reasons: first, because I summarized a much shorter book about arranged marriages on here before, and even that took forever; and second, because I'm feeling a bit cynical right now.

If you are a Freudian stereotype, or what William James called a "healthy-minded" individual and Beck calls a "summer Christian," then it is unlikely that my short analysis of this book will break through the onion-layers you've wrapped around your fear-driven inner self.  You'll most likely be put off by what I write, won't read the book for yourself, and will go back to being happy in what is, in many ways, a delusion.

And you know what... I don't want to be the one to rob you of that delusion, because from what I've experienced of life as a sick soul, it really, really sucks. While I do think it is far better and far more honest to accept uncomfortable truths than to roll around in cotton-candy lies, I'd rather just pull out my own favorite existential cop-out and say that I figure it's God's business to curb-stomp you out of your Thomas-Kinkade-Land, not mine.

Instead, I'll just summarize Beck's findings, then talk a little bit about why I think they're important.

In short, he found that Freud was right. Through some pretty ingenious experiments, he discovered that by priming Christians with thoughts of their own mortality, he could get them to be meaner to Out-group members, to retreat further into comfortable, easy (and un-biblical) theological standpoints, and to completely disregard certain aspects of reality - like, say, ignoring the fact that most overtly-"Christian" art just kinda sucks.

He also found, however, that Freud was not completely right... that there are those "winter Christians" or "sick souls," who maintain their faith, but refuse to use that faith as a buffer from the harshness of life and the scary reality of their inevitable, impending deaths.

I would like to have seen Dr. Beck go further in depth on the make-up of the sick soul population. What percentage of Christians in his studies fell into this category? Were their correlations of income, education, or IQ? If you were to give these people personality tests, would they all turn out to be of the same type? And if so, what would this mean about faith? Could it be argued that religion is inherently an existential crutch, but that some people are just constitutionally incapable of using it that way? If that were the case, it would certainly be a (useful, necessary) blow to the pride of those who, like myself, are quick to try to toss our lot in with that, er, lot.

Dr. Beck makes it clear that his are only preliminary findings, and that much more research is left to be done. My sense, from my observation of humanity, is that it's all a continuum, and no one is ever entirely just one thing. For my part, though, I'm going to keep trying to move further toward sick-soulness, and real love.

This is where I renege on the claim of non-egoism.

For the whole of my adult life, I have been struggling my way along this continuum... refusing, for the most part, to be satisfied with easy answers, and choosing instead to attempt to live out the philosopher's creed: to live, as they say, with "my death always before my eyes."

It has been a hard, painful, sucky row to hoe. It would be far, far easier to resolve the tension by either walking away from faith, or retreating back into the comforting, and often untrue, un-Biblical, and un-real worldview-constructions that still niggle around on the edges of my consciousness, telling me it all ought to be easy - that everything ought to make sense.

But I'm not going to apologize for my egoism.

It is my belief that the path of the sick-soul (be he/she a Christian, atheist, or some other worldview-project person) is the only honest path through life. To live honestly is to really see, which - as I argued in my posts on how to fall in love with a chair, yourself, and a woman - is the first and most important step towards love. I believe that in my faith's mysteries are more truths than I'm willing to lose, but neither will I risk stepping away from love by taking the path of least resistance, theologically and existentially.

Wanting to live that way doesn't make me awesome, it makes me miserable.

But as I said in a recent blog post referencing this book of Beck's, "It sucks, sometimes, to spend a day crying tears of sorrow as I make something that'll hopefully bring someone else tears of release. But would I trade it all for a little soma and a blissful release?