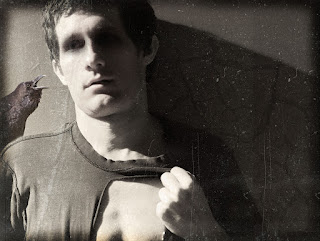 Just scroll back through a few posts on here counting the number of personal pronouns -- "I" this, "me" that -- it's ridiculous.

And I don't know how to stop.

I try to temper it, as I can, by revealing unpleasant truths about myself -- by writing essays and poems that point out what a screw-up I am. But that, too, is often an affectation, designed to elicit sympathy, or appreciation for my astounding humility.

I could tell you, for example, that I've sent out about a hundred submissions of poetry and prose to literary journals all over the country. I could whine about how hard it is, and what a risk I'm taking telling you this, given the (extremely likely) probability that I'll feel obliged to report to you when the final, one-hundredth rejection comes in.

Public, self-inflicted humiliation -- a proclamation from the treetops that I don't measure up.

Hooray for me, and my public humility (it shares a root with humiliation, after all).

But scrape off a layer, and you'll see perhaps my cloying attempts to garner affirmation... to share this public humiliation so that, when it's all over, you'll tell me what idiots those editors are, and send me links to stories about how many times the Beatles got rejected, and so on. I could wait to tell you about my submissions until after my writings start to be accepted, but I think there's just too much of me that believes this will never happen, and wants you on my side for it.

Why should I do this?

Everybody hurts (sometimes), and everybody gets humiliated at work... so why should I be any different? Why can't I be content to privately take my medicine like a good little boy? Why, knowing this, can't I seem to stop blabbering?

I can think of a couple reasons:

First, there's that pesky ego. Perhaps, whatever happens, I want to feel that there are people who believe in me -- doubts and all.

And second, there's the possibility that I might get a chance to write something true. Adulterated, sure (flawed by its contact with me, the unworthy vessel), but there's still a chance that somewhere, somehow, I'll get to say something real. Something that connects. Something that means something to somebody else, and does some good.

It has happened before, you know... even on here. I've gotten the most lovely notes from men, women -- even children -- that have made me think it might be worthwhile... this arranging of words. I wrote a bit once about my hate-affair with math, and a third-grade girl commented on how much she hated math. Beautiful.

Now I want to write films.

I want to put out words that become pictures and get into people's minds and shape the way they think, but I can't escape the fact that these pictures are all part of the machine against which I would hope to prognosticate.

I just watched NETWORK, the 1976 film written by Paddy Chayefsky and directed by Sidney Lumet. In it, there's this lovely little rant by a Newscaster-gone-mad, who says,


At that point, the newscaster falls over in a dead faint. The Network freaks out, but promotes his show like mad because his outbursts bring about an awesome ratings boost. Everybody's making money, so they're happy to ignore the irony of all this... that is, until later, when they literally kill him off, live on television, because of slumping ratings.

I can jump right into the system, thinking to inject a little truth; but in the end, it's likely to swallow me up and send me back my script, demanding I insert a puppy, a couple sex scenes, and a half-dozen more explosions.

Why write stories for a wider public, knowing that it won't work -- occupationally, at least -- unless on some level I'm willing, like the character in NETWORK, to tell people anything they want to hear?

I guess it's because I believe in stories. I believe they do have transformative power, and that although that transformation will always be slow and painful and ignored by the vast majority (who prefer, like me, the path of least resistance), that connections can be made. People can change. Love can grow.

That might be why I keep throwing myself out onto the internets like this. Maybe I think or hope that despite all my false humility and ego-driven little schemes, that if I keep at it long enough, a little truth might leak through.

The NETWORK, for all its ranting at the system, is really just about men and women who want, deep down, to be loved. And that, at least, leaked through.
Labels: writing