your church is too expensive 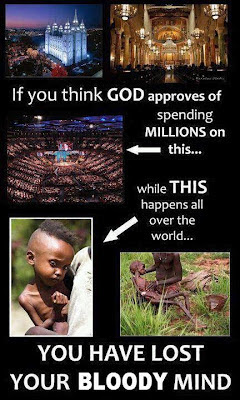 I came across this picture on Facebook last night, shared by someone named "Progressive Secular Humanist Examiner," and -- as I've been on a bit of a Facebook tear lately, ranting at megachurches -- I thought I'd throw out a few reflections on here, as well.

First, I want to say that while I absolutely LOVE the message of this picture, I do tend want to quibble, a bit, when the money is being spent on extravagant art/architecture that is (theoretically) intended to reflect the glory of God.

There is something worthwhile about a cathedral, yes.

But I don't think there's a megachurch in America that's built with beauty as a primary concern, and I know there isn't a single one structurally sound enough to last longer than maybe fifty years without major overhaul.  Drywall isn't exactly granite-tough.

Still, I think the point of the picture has to be reckoned with, and that it's only possible to quibble and have arguments over the relative value of art if the people dying of malnutrition are another color, and in another country. If fifty million white people were dying of starvation next door to even the most beautiful cathedral project ever, there aren't too many people who wouldn't say it would be WRONG-WRONG-WRONG to continue pumping money into the building fund while those people die off.

Feed the hungry, then build the cathedral.

And just because people wouldn't give money to the poor unless they had a fancy building to do it in does NOT make it right.  Nor does the small percentage of their money that megachurches transfer to the needy actually justify the pastor's half-a-million-a-year salary (yeah, I'm talkin' to you, Rick Warren) and the bajillions spent on programs for the members themselves. That's just getting a tax break for paying for membership in a country club.

Sure, it isn't really an either-or dichotomy, and there are plenty of other places to get the money to feed the dying -- Americans spend 90 million a year on their pets, for example, and probably a whole lot more than that on hair-products. But since a church building is a symbol of the Church universal, which is SUPPOSED to be all about showing practical love... well, there's a serious disjunct, there, and I am not surprised if some "Progressive Secular Humanist" sees the hypocrisy in that.

My question is, why is someone outside the church fulfilling the necessary prophetic role?

I'm as hypocritical and selfish with my money as the next guy... but it's not like it takes eagle-vision to see that something's really, really wrong, here.


*Note: I put a lot of time into giving you this ad-free reading experience. If this post means something to you, you are more than welcome to pay me back by linking the bejeebers out of it on your social medias. Dankegratzithanks.
Labels: church