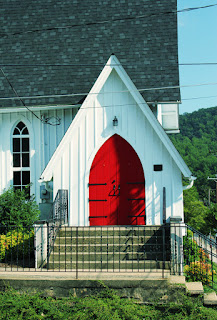 Trick Question: Do you go to church?

When I was growing up, "going to church" was defined, at bare minimum, as attending a Sunday morning service at a Protestant, Christian, tax-exempt institution of relatively conservative denominational affiliation. While everyone was very careful to say that going to church wasn't the thing that "saved" you, it was nonetheless made quite clear that you could not be spiritually healthy unless you did. And by "not spiritually healthy," it was implied that a person who did not attend services at an approved institution was quite likely in danger of being tortured by God for all eternity.

"I heard Blankety-Blank went off to college and stopped going to church," Gossip A would whisper. "I'll pray for her [soul]," Gossip B would rejoin.

To be on the safe side, a person needed to also attend "Sunday School" and perhaps Bible Study on Wednesdays, in order to get over the hump and demonstrate to the Divine a more perfect sincerity.

Catholics were, of course, damned regardless of how many services they attended, as were Unitarians and everybody else who didn't fall on the "right" side of the propositional fence regarding the Really Important Issues, such as: Evolution, Homosexuality, Abortion, and the Right of America to Violently Suppress the Enemies of Capitalism.

This was never explicitly stated, of course. It was more cumulatively assumed, and osmotically imbibed.

Me, I'm on a search for Clarity (see blog header), so I don't have any problem with explicitly stating That Which Should Not Be Spoken.

I also don't have a problem with telling you why I believe the church you attend might not be much of a church at all.  For the first time in (counts fingers) twelve years, I'm "going to church," in the sense I've described above [Lutheran, I think, and every Sunday], so I feel it gives me the right to point the finger and say, "Nah-nah-knee-nah: your church is stupid, and possibly not a church."

But chances are very good that I've never been to your church, Reader-Person, so you are of course free to assume that y'all are the exception. I've been to a lot of "churches" in North America, though, so I feel justified in making that statement.

Rather than attempt to define by negation, though, I'm going to give you a list of questions I came up with a couple years ago for a student who'd asked me what I thought made up a church.

Just know this: as presumptuous and arrogant and stupid as all you church-attenders out there are now assuming that I am, I am NOT saying these things because I am in any way antagonistic to Christ.

Quite the opposite. I am, in fact, quite a big Jesus-guy, and it saddens and annoys me the way a lot of people have claimed that name and then soiled its reputation by getting into bed, on an institutional level, with the worst aspects of American culture. So, without further ado...

Twenty Questions (in Random Order) to Ask Your Church to Determine if It's Really a Church, or just a Big Stupid:


1. What percentage of this church’s budget is spent on the poor, widows, orphans, and those oppressed by injustice?*
2. What is this church doing to actively encourage stewardship of the earth by its members? Does it reduce, re-use and recycle as much as it can?**
3. How often does this church speak out against America’s most prevalent and approved ailments of consumerism, self-worship, greed, gluttony, gossip, and cetera?
4. How does this church treat people with whose moral choices it disagrees?
5. How often do the people of this church interact, as representatives of this church, with people whose worldviews the church disagrees with or with whose lifestyles it takes issue?
6. What is this church doing to make peace with people who hold different worldviews?
7. How does this church view real art and creativity?***
8. Is there any structure within this church whereby people are encouraged to confess wrongdoing to one another?
9. Is power in this church concentrated mostly in the hands of one person? For example, how often does someone other than the main teacher speak to the church as a whole?
10. How does this church respond to questions and doubts about its core beliefs and values?
11. Am I able to be wholly myself at this church? Are there things I talk about outside of this church that I cannot talk about inside it? Am I afraid when I am in this church to be honest about where I am really at in life?
12. Do I feel loved by the people of this church – not perfectly or completely or all the time, but generally?
13. Are my thoughts and opinions valued and duly considered by leaders in this church?
14. What percentage of the teaching in this church encourages me to actively love those in need?
15. What percentage of the teaching in this church is based directly on the words of Jesus?****
16. How does the population of this church reflect the socioeconomic and racial divisions in the culture at large (that is, is it an agent for the healing of cultural divides, or a cluster-cuss)?
17. In what ways does being a member of this church involve sacrificing myself for the good of others?
18. Does this church view children as inheritors of the kingdom of heaven? Does it value their input, role and perspective as highly as that of the adults? Which is to say, are marginalized people groups (like kids, women, the disabled, etc.) patronized, or honored?
19. In what ways does this church encourage its members to establish their identity as separate from the culture around them?
20. Would Jesus be happy in this church, or would he start hollering and bustin' people up?
- - -
*A friend of mine was once being actively recruited (yes, recruited) by a mega-church that bragged to him that they spent ten percent of their budget on "programs for the poor." That means that nine percent of the money their victims attendees were giving was going to administration, overhead, and programs for the Club Members. God(literally)damn that mis-appropriation of funds, I say, and can someone PLEASE strip American churches of their tax-exempt status until they start acting like actual churches.
**As in, does anybody at the church care how many plastic cups go into a landfill EVERY SINGLE COMMUNION, or how many styrofoam plates get trashed after every church potluck?
***This isn't just me hobby-horsing. This is a super-important indicator, because the Evils of the "church" are most-often created by people who are attempting to put on the Ring of Power and Control their way into Heaven. True art defies attempts at Control. It is a dangerous, unsafe thing.
****"Reformed" churches are notorious for preferencing the words of the Apostle Paul over the words of Jesus. My sense is that this happens because Paul, as a logician, fits a bit easier into the calculated, often-cold conception of the world proposed by Reformed (and particularly, hard-line Calvinist) theologians. Jesus was a dangerous poo-disturber and, like Art and Lions, devours people stupid enough to try for control.


Now if - having taken my little quiz - you notice that the "church" you're attending is scoring really, really badly on it and you start thinking it might actually be stupid, and not a church, then you have my permission to quit going. God won't be angry. God won't even be angry if you look around and can't find a place that actually is a church (well, not at you, anyways).

This is because a church isn't a place. It's a concerted, ongoing action, taken in faith-community. Find THAT, and get involved. Like, yesterday.

Here are a few hints, though, if you're really attached to the idea of attending services somewhere on Sunday mornings: