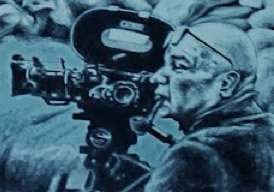 I recently read a cracked.com article arguing that film-makers are the myth-creators of our time, and that Hollywood's myths directly control the thinking of the masses. Although I thought the writer's approach was a bit reductive of the infinite complexity of human experience, the point about the power of myth was brought startlingly home to me shortly thereafter as I watched Episode 7 of season one of THE NEWSROOM, which covered the assassination of Osama bin Laden.

Over a year ago, I wrote a post entitled "Thoughts on Osama bin Laden (who is dead)" in which I voiced my qualms over the jubilation being expressed over the death of another human being. It felt, to me, like I was watching some little old lady knitting and cheering at a public execution, giggling as the guillotine dropped and blood sprayed out just shy of her dainty, slippered shoes. Cathartic, sure, after the fear, pain and anxiety felt by so many after the events of 9/11. But still, somehow... off.

Perhaps that was just me being wrong-headed, a victim of the odd compendium of circumstances that formed me into an unendingly counter-cultural chap who -- even whilst watching the second plane crash live into the tower, as people jumped to their deaths to escape the fire and smoke -- was already attempting to locate the events in the broader context of the inexplicable savagery of all humankind and (temeritous as I am to admit it) the ongoing spectacle of American-sponsored worldwide violence.

Regardless of how it happened, as I watched Episode 7 of THE NEWSROOM, I kept thinking that Aaron Sorkin -- whose writing I respect immensely -- was going to step back a moment and reflect on the inherent irony of cheering for a violent man's death. He did not... which wasn't particularly surprising.

What did catch me off guard, though, was the way I got caught up in the emotion of the TV show... in a way quite beyond what I felt at the actual news of bin Laden's killing. This I found exceedingly strange, and a confirmation of the message of the cracked.com article. There I was, a non-believer in the Infinite Rightness of Ultimate Justice for the Enemies of America, and I was crying -- yes, crying -- along with the characters in a fictional, fiftyish-minute account of the event.

This came back to me a couple days ago as I was reading Joe Sachs' introduction to Artistotle's POETICS, in which he talks about the nature of tragedy in drama, and how this plays out with wonder. "What is characteristic of wonder," Sachs says, "is the sudden loss of the sense that we understand what is going on. What it knocks away are all our habitual assumptions and opinions. In the state of wonder we are not fitting what is in front of us into the explanatory structures that normally guide our lives, but are in the rare condition of taking in the things before us just as they are."

Sachs goes on to add, however, that "it does not follow that the poet has taught us anything. His impact is on our feelings, and we can recover our usual habits of judging as soon as those feelings wear off." While the experience of wonder may lead us to think more deeply, Sachs says, this is not an inevitable result, because wonder is a sort of end unto itself. Wonder is pleasurable, and so we will often chase the experience just for the thrill of it.

This, then, is the power of story: it does not force us into a new way of thinking, but rather takes us on an emotional journey, showing us the pathos behind another human being's experience of the world. Then, having (in some almost mystical way) felt what they have felt, it is the unique power of story that it forces us to make a decision. Will we judge the other person as qualitatively different than ourselves for what they do, or will we empathize and understand that forgiveness is not the herculean effort of a superior to an inferior, but the humble acknowledgment of the universality of all of human experience.

Or, as the Beatles would say: I am you and you are me and we are we.

In that regard, I think Episode 7 of THE NEWSROOM did work on me, in that I walked away with a better emotional understanding of why a person might do a thing -- like cheer for somebody else's death -- with which I disagree.

I am trying, as an aspiring screenwriter, to provide this sort of empathetic experience to others -- to bring them to the point where it will be easier for them to choose understanding, forgiveness and love without condition or demand.

I can't make the decision for others, nor can I know with certainty whether the sort of love to which I wish to steer them is, in fact, always their best choice. It's pompous and horrendously presumptuous of me to try, and so it scares the bejeebers out of me. But while it could be that I keep on barreling down this path out of nothing more than pride and stupidity, I prefer to think it's because it's a whole lot of fun.
Labels: death philosophy war writing