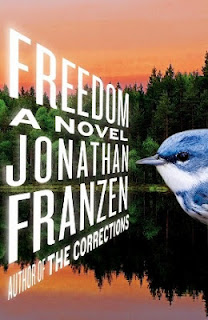 The following is a tongue-in-cheek rant spoken by Richard Katz, a fictional rock star in Jonathan Franzen's novel, FREEDOM:

"I think it's good for the honesty of rock and roll and good for the country in general that we can finally see Bob Dylan and Iggy Pop for what they really were: as manufacturers of wintergreen Chiclets... I’ve been given the opportunity to participate in the pop-music mainstream, and manufacture Chiclets, and help try to persuade fourteen-year-olds that the look and feel of Apple Computer products is an indication of Apple Computer’s commitment to making the world a better place. Because making the world a better place is cool, right? And Apple Computer must be way more committed to a better world, because iPods are so much cooler-looking than other MP3 players, which is why they’re so much more expensive and incompatible with other companies’ software, because—well, actually it’s a little unclear why, in a better world, the very coolest products have to bring the very most obscene profits to a tiny number of residents of the better world. This may be a case where you have to step back and take the long view and see that getting to have your very own iPod is itself the very thing that makes the world a better place. And that’s what I find so refreshing about the Republican Party. They leave it up to the individual to decide what a better world might be. It’s the party of liberty, right? That’s why I can’t understand why those intolerant Christian moralists have so much influence on the party. Those people are very antichoice. Some of them are even opposed to the worship of money and material goods. I think the iPod is the true face of Republican politics, and I’m in favor of the music industry … standing up proud and saying it out loud: We in the Chiclet-manufacturing business are not about social justice, …we’re not about a coherent set of national ideals, we’re not about wisdom. We’re about choosing what WE want to listen to and ignoring everything else…. We’re about giving ourselves a mindless feel-good treat every five minutes. …We’re about persuading ten-year-old children to spend twenty-five dollars on a cool little silicone iPod case that costs a licensed Apple Computer subsidiary thirty-nine cents to manufacture."

Here's a link to FREEDOM, which I'm currently reading because a friend recommended it and then I found it at a thrift shop for a buck. The book's a bit of a ramble, but with truths about humanity (and myself, who happen to be human) all over the place. It also has lots of sex-words all over the place. So, be fore-warned... your eyeballs may tingle.