God the Meany: a completely unqualified commentary on Matthew 4:5-7 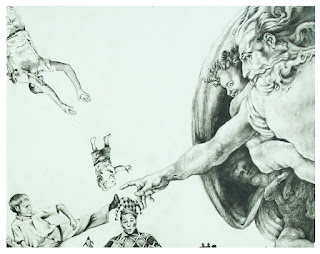 I was trained to think of the Bible as a weapon. Usually a sword; but also a blunt, non-marking object, as well - because in a pinch, a Bible does a grand job as a stand-in for a phone book. Have you ever seen someone bludgeoned with a Bible? I know I have, and it's not a pretty picture. Take Matthew 4:5-7, for example. It reads as follows.

"Then the devil took him [Jesus] to the holy city and had him stand on the highest point in the temple. 'If you are the Son of God,' he said, 'throw yourself down. For it is written: 'He will command his angels concerning you, and they will lift you up in their hands so that you will not strike your foot against a stone.' Jesus answered him, 'It is also written: 'Do not put the Lord your God to the test.'"

That's from a story where the devil apparently had the cojones (and permission??) to take the Incarnate God of the Universe (who apparently made him) out into the desert, wait 'til he'd starved for a very long time, and then tempt him with some stuff.

The reason for this, I was taught at a young age, is that this passage was to be a blanket argument to shut down my questions and doubts if there was ever anything God did that seemed idiotic to me. "So, if God's so good, then how come my friend who lives in Tushmo [Peruvian barrio] goes hungry all the time, whilst I get fat eating ice cream?" I'd ask. "Do not put the Lord your God to the test," they'd reply. Which is to say - "Who are you to question GOD, you little pipsqueak?"

Fair enough, I guess, given that the entire book of Job seems to be geared toward making that very point. But that's where it gets confusing. Because on the other hand, about half the book of psalms consists of the author(s?) telling God how unjust and obnoxious God is for letting the bad guys win all the time.

It begins to sound suspiciously like not every portion of the Bible gives exactly the same message. Whuh-whaaaa? Could it be that different people at different times felt differently about how God was interacting with them, and that the Bible is geared more towards encouraging us to be honest in our dealings with the Almighty than it is with providing us with one, single, cohesive narrative that will act as a sort of scientific textbook for handling any and all situations we might encounter?

That was the "Old Testament," though, and Matthew 4:5-7 is talking about the Jesus of the "New Testament," the very Christ about whom this whole "Christ-ianity" thing is supposed to revolve. So what's this story trying to say?

I, of course, have very little idea. I'm not Jewish, I wasn't alive in the first century, and I'd rather prod at my eyeballs with a dull plastic spoon than do the sort of work it takes to be called a "scholar." This is why, for the most part, I leave to Caesar what is Caesar's (croutons), and spent my day writing stories.

Still, I was blathering on last night about Love to someone and said something about Love not being the sort of thing you poke at, just to see if it'll bleed, and it suddenly occurred to me that perhaps that is what this story is all about - not, as I'd been bludgeoned to believe, that you should never question God; but rather, yet another way in which the stories of the Bible are intended to show us what Love (and, by implication, God) is all about.

It seems to me that if the Christ at the heart of it said that the heart of it was Love, then the whole thing - the whole, bludgeon-stick shebang - ought to be read and interpreted in the light of that Love. And Love, as everyone who's ever had (or been) a clingy, over-anxious boyfriend or girlfriend knows, doesn't go around constantly testing itself to see if everybody really, really means it. What True Love does, my friend, is it enjoys it.

Maybe - just maybe - Jesus wasn't throwing out yet another rule to make our lives difficult. Maybe he was reminding the devil (whom he made, after all, and coulda turned into a hood ornament, after he'd invented cars) that Love transcends doubt. Maybe he was just saying that he, Jesus, was confident of God's Love for him, and had bigger fish to fry.