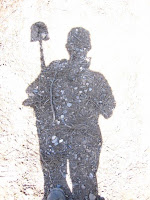 "Commie planting" is tree-planter parlance for working with someone and then at the end of the day - regardless of who planted how many trees - splitting the total tally evenly. Successful commie-planting partnerships are rare (and rarely last very long) because treeplanting is backbreaking piecework, and we as humans are hard-wired to be money-grubbing, greedy little capitalists.

That, at least, is the narrative I've always been fed. "Sure," they say, "capitalism is promulgated and sustained by human greed... but what's the alternative? If we don't have a reward system directly tied to effort and motivated by the basic, fear-tied emotional undercurrent of greed, then how do you expect to ever get anything done?"

The argument is compelling, and seems to have "worked." The Protestant work ethic, tied to the Capitalist Machine, has made a lot of people very, very wealthy. But at what price? What does it profit a country to gain power over the whole world if, in the process, it loses the essence of what it means to be human? What of love? What of grace? Must we ignore what many economists have pointed out - that the greed-motivator does not level the playing field, and that the greatest rewards often just end up going to the greediest? Is this good - this world we have - when a small percentage of us get to roll around, living off the fat of everybody else's land? Is this really the only way we, as humans, are capable of being?

Boat and Baguma were not perfect tree-planters. They could be whiny, selfish, greedy punks, just like everybody else. But they still commie planted all season long. It didn't matter if they were on the same crew, the same cut-block... or even if one of them was too sick to do much of anything. They always-always-always split their tallies right down the middle. And together, they highballed... which is to say that one summer, working together, they commie-planted their way to the position of Top Planter in our eight-hundred-planter company; earning (as I recall) over twenty-one thousand dollars each. 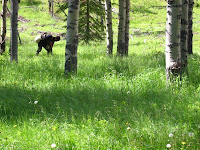 Why did this work?

I hear a lot of Righties out there using the word "socialism" as a sort of evil catch-phrase, a way of (they believe) vilifying their opponents and ending all discussion. I think that a lot of times, they're wrong. I think we've grown rich in money and poor in spirit by accepting without question the Capitalist System as it has been handed down to us - by appealing first to human greed.

I think it's time we try something else.

But we don't live in a world where "ought" ever really gets a chance to become reality; and when the people with the power are the people with money, a country that is ostensibly a democracy ought to rise up and design a system where love and hope - not greed and power - are the forces that define economic justice.

You could no doubt show me a dozen reasons why it would never work. I'm not talking about pragmatism, though. I'm talking about hope. I'm asking you to imagine a different, better world. Perhaps we've spent too long trusting in the benevolence of fat, entitled white guys. Perhaps it's time to start asking the Africans how to run the show.

(I mean, it's not like it's a matter of life and death, right? It's not like anybody's dying because of the uneven distribution of wealth, right? Right?!? RIGHT?!?)
Labels: work