it's hard, sometimes, living with a genius

My son is (obviously) waaay beyond me, creatively. So occasionally, I'll try to talk him into collaborating with me on something. He let me color this piece, but the rest of it is all his doing. Although he's sometimes recalcitrant (his word, not mine) about revealing his intentions, he informs me that in this picture, "There's a bomb under the ground, and they put it under the house (the round thing with the spikes are the bomb). People are finking the bad guys will come up, and some bad guys are in the house, and they're already fighting. There's a airplane in the sky, and a bird. I drawed one bird - the other bird got shot by the bad guys; bad guys shoot people - And that's not all: the house is in the rainforest. That's how we do it!"

So basically, the kid's exploring some interesting ground as a neo-primitivist. Primitivism, as you know, is an art form in which the artist attempts to revert to a child-like, primitive state. Actually, if painters could be method actors, that's what this kid is... because he's in character twenty-four-seven. Un-be-freakin-lievable! 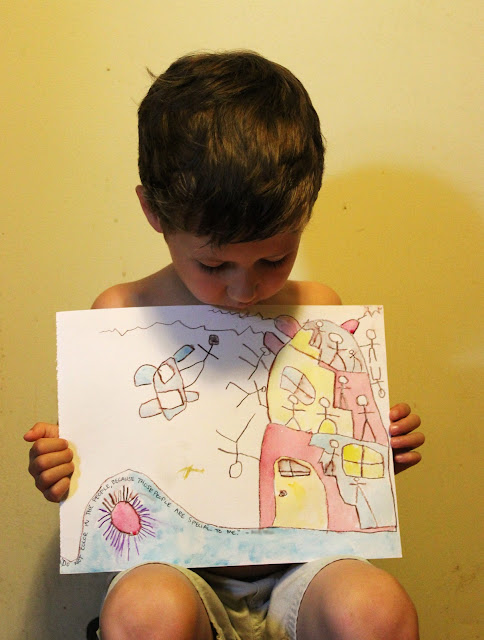 The caption reads, "Do not color in the people, because those people are special to me." Genius.
Labels: art parenting