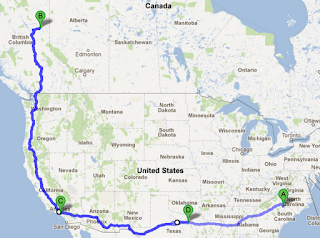 Past Josh did a decent job of filling in for my vacant brain last week, so I thought I'd go ahead and give him another shot.

Today's post comes from Past Josh's post-University Big Drive, in which he left the town of Chetwynd, BC and drove his aging diesel Jetta south along the highways of Canada and the United States, through Los Angeles and the indefensible hell-hole that is Dallas, to Waxhaw, North Carolinica.

This brave adventurer took this 4,369 mile journey alone, without even the aid of a cell phone, or satellite radio (which had yet to be invented). He wrote the following bit in his journal after an eight hour drive from Los Angeles, California, to Tucson, Arizona. His car's bearings had yet to give out; he had not yet suffered a hallucinatory episode a la Hunter S. Thompson after driving twenty-one hours through 114-degree heat in a tin can without climate-control; and had yet to receive the call telling him that the clowns (a.k.a. "Mission Board") who were supposed to be raising funds for his future community development program in Nicaragua had completely dropped the ball.

No, Past Josh was riding high. Life was good. The future was full of possibility and he had yet to sink into the emotional tumult that would catapult him towards marriage, un-marriage, and the most beautiful man-child to ever wriggle out onto God's Green Earth.

What, you wonder, would Past Josh write about on such a day? Well, this:

In the middle of the night I drive away from this desert by the sea, over rocky mountains and down into another desert scattered with cactus, canyons and arroyos - a jagged landscape speaking of the recollected desolate landscapes of a hundred-and-one long-forgotten Western Novels.

In those days, men traveled, as I do, across the dry wasteland, driving wagons and horses to the next town; the next job; the next brothel. Yet their world was much more cruel and unforgiving - a world where a dead horse or an empty water skin meant slow, hallucinatory death.

These days, the highway is an avenue of safety - a protection from the cruelty of a dessicated and unforgiving mother nature. This reminds me of how I once yearned to be a Sackett brother, slinging bullets in a L'amour.

But it's the foolish luxury of times of excess to think of death-closeness with longing. If the many, many horses I now control under my car's hood die, I can most likely count on the kindness of a passerby (or a voice on the other end of a help-phone line) to bring salvation from the parching heat, so I know that these are the thoughts of a fool who's never kissed death - never felt its close breath in situations beyond his control.

And yet... even now, knowing this, I feel a tugging of the romance of living when malls and movies were not, and a fellow didn't have to gradually watch himself dissolving away into a thousand un-essential details. I imagine that when life was a struggle to evade the touch of death and when food and water were hard come-by, it was impossible for thoughts to linger on trifles and the small stuff remained un-sweated.

But as I say, these are the idle thoughts of an idle man-boy whose belly is full and whose mettle's barely tested. Perhaps I'll live to regret my naivete. For now, though, it's good to relish this freedom - to sit out and watch the stars of a clear desert night.
Labels: age death guest post