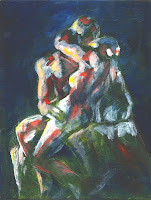 My job was to guard the outside door and ensure no one escaped to their cars for fornication, or the liquid courage they might desire for subsequent attempts at fornication. After a while I ended up in conversation with the gallery owner, a forty-one year-old artist named Shayla, and her beer-drinking king shepard, Mojo, who (the artist, not the dog) tried to convince me that daVinci wasn't an artist, he was a "renderer." This is, I suppose, because she's from New York and therefore (obviously) a feminist.

If I have learned one thing about women lately, it's that the ones with the most interesting opinions are all feminists.*

As the evening wore on Shayla, the Landlady, Mojo and I got into a discussion about the boundless optimism of teenage love. Mojo wasn't saying much (having no real vested interest), but the Landlady and I were making snide remarks about the law of percentages until Shayla broke in to say, "It's kinda crazy I'm the voice of hope here, given that I'm the one whose husband committed suicide."

This was, as you might imagine, a bit of a conversation-stopper. So after we mumbled our condolences, the Landlady said something about how the problem today was that women had basically grown a pair and were no longer willing to accept the sort of scheizhe men like to dish out.

At the risk of sounding like I'm trying to cop out of the various creative ways in which I've sabotaged the relational pairings of my life, I feel it's fair to say that it can be hard, these days, to be a man - to figure out what I need to do to earn (and maintain) the affections of one of today's modern, feminist women (them being, as I have said, the most interesting women of all). The tables seem to have been turned, as men are being forced (about friggin' time!) to try to accommodate themselves to women's expectations and desires.

An old planting buddy of mine recently wrote a blog post about gender roles, and in it he referenced the feminist anthem-poem "Phenomenal Woman," by Maya Angelou. It's a great little piece of work (go. read it. now. seriously.), and it instantly reminded me of a woman I know/knew, a woman whom I could not seem to figure out how best to engage. This was mostly because I'm still working through some of the fears that surfaced as a result of the implosion of my marriage; but I think it also has something to do with the fact that she is a modern, feminist woman and I am a modern, sensitive, ridiculously-confused man.

I would like to be able to offer you my prepped-and-plattered conclusions/solutions, but I can't. Everything's a jumble when you're living through a succession of relational humilities, and so instead I will give you the thing my mind seems most to want to make these days - a poem:

If I should be so lucky as to find my Angelou,
my own phenomenal woman...

if I should fall, kneeling, before her honey-combed hair, there -
her hive...

if I should be so lucky as to come alive
in the sun-warmth of her face,
her curved breasts, her pillared neck, her waist...

if I should bathe in the phosphorescence of that incandescent smile,
framed by her waving hair...

a little more phenomenally me.

*Note: Da Vinci is obviously the man, and Shayla obviously a little out of her mind. Nonetheless... very, very interesting.
Labels: poetry relationships