Poetry 102: brought to you by Professor Pooh 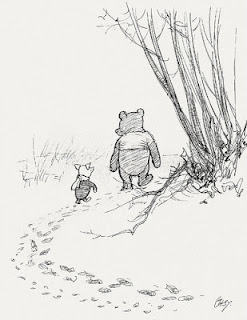 "Pooh and Piglet walked slowly after him. And as they walked Piglet said nothing because he couldn't think of anything, and Pooh said nothing, because he was thinking of a poem. And when he had thought of it he began:

What shall we do about poor Tigger?
If he never eats nothing he'll never get bigger.
He doesn't like honey and haycorns and thistles
Because of the taste and because of the bristles.
And all the good things which an animal likes
Have the wrong sort of swallow or too many spikes.

Pooh was thoughtful when he heard this, and then he murmured to himself:

But whatever his weight in pounds, shillings and ounces,
He always seems bigger because of his bounces.

'And that's the whole poem,' he said. 'Do you like it, Piglet?'
'All except the shillings,' said Piglet. 'I don't think they ought to be there.'
'They wanted to come in after the pounds,' explained Pooh, 'so I let them. It is the best way to write poetry, letting things come.'
'Oh, I didn't know,' said Piglet."