lying your way (magically) out of the mud 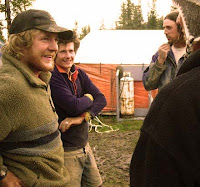 "I just said... well... under what circumstances would you accept an excuse for late work?"  she asked.

I thought about it. My graphic design / photography students all knew I was a bit of a pushover, but she was asking about her already-late assignment for our 31 Nights project, and I was determined to be as harsh and unrelenting as possible on this one.

"Well," I said, "the way I see it, any problem y'all have that gets in the way of solving the creative problem of the assignment is just another creative problem, and becomes part of the fun of it. Once you've tried every conceivable solution and you still can't get it in on time, then I'll accept that as a legitimate excuse."

She nodded, but I felt like driving the point home with a story.*

"That reminds me of something that happened to my brother, Jo-Ben, back when we were both out leading tree planting crews in the wilds of British Columbia and Alberta," I said.

"One night, Jo-Ben showed up in the cook tent even more muddy and bedraggled than usual. It had obviously been a rough one, but Jo-Ben was beaming.

'What happened to you?' I asked.

'Ooooohh...' he answered, drawing it out for emphasis, 'Just let me get my dinner, and I'll tell you in a minute.'

Jo-Ben, you see, required a larger audience. So I waited as we went on down the line, heaping our trays high with mountains of delicious food, prepared for us by Soll, a catering company responsible for providing hot, steaming grub for our camp of over forty nasty, greasy, grubby tree planters. Scalloped potatoes, ham, green beans, bread, potato salad, banana loaf - the piles grew in front of us in a doomed attempt to replace the unbelievable quantity of calories burned** over a full day spent doing the miserable, grueling work of tree planting.

At last we settled down gingerly onto the precarious, jury-rigged benches running down the sides of the cracking plywood tables in the eating tent. The place was full - thick with laughter and humidity emanating in waves from the tightly-packed planters. Jo-Ben leaned back, completely neglecting his meal for the pleasure of a tale.

'I am the best foreman who ever lived!' he announced, loudly.

I knew better than to argue, or interrupt.

'Well, we finished it up and they didn't want to spend the extra coin flying the quad back out, so they'd told me to follow the map and ride it out at the end of the day. It was quite a ways back to the trucks and the deactivated road I was on was pretty gnarly, so I decided to cut down a seismic to take some time off.****

'It was a lot flatter than the road and I was just ripping along, when all the sudden I hit a low spot and started to get seriously bogged down in the mug - you know, like that thick, black ooze that just sucks you down? And I was pretty sure I was gonna make it out the other side when BAM! I got high-centered on a stump, hidden under the mud. I got off the quad and sunk down in to about mid-thigh. I was hooped.'

All over the eating tent, appreciative nods and chuckles. My brother is the consummate storyteller, and his bearded, wild-man treeplanting persona commanded attention. The place was rapt, now. He went on.

'My radio was dead - nobody knew where I was - it was getting dark - I was stuck over the axles in black muck - and I was high-centered on this massive effing stump! There was no way out of it. I was done. Except... I couldn't be done. It would take way too long to hike out, and anyways I couldn't just leave the quad there... they'd kill me.

'I got to work. First, I pulled my planting shovel out of that little slot-thing on the side of the quad and started to scoop away some of the mud from around the tires. It took forever - I mean, you've seen my little spoon-of-a-shovel, right? Then I mucked my way to the bushline and found some chunks of rotten log to jam under the front tires for traction.

'I grabbed a long, sturdy pole and wedged it waaay under the hitch on the back of the thing. I bent over, got my shoulder under it, and - straining so hard I sunk down another foot into the mud - managed to lift the back of it up out of that suction mud, so that now the front tires were down and grabbing some on the bits of rotten log. Awesome, right? Except, now I had a new problem.'

'Exactly.Who cares if I can get the thing off high-center, if the moment I stop straining against that fulcrum it just sets back down where it started? I can't lift and push at the same time, so I'm exactly back where I started. I'm hooped. Totally and completely hooped. I might as well just lay back into the mud and wait to fossilize, right?'

'Right,' I said, sensing he needed the encouragement.

'Except, I had to get out of there,' he went on. 'I couldn't - there was no way - but I HAD to. And just then - just when I was about to give up, I had it - a stroke of pure genius! I dug into my pack and pulled out my plot cord.***** Then I started the quad back up, put it in first gear, wrapped the loop of the plot cord over the right handle-grip and around the thumb-lever for the throttle, and mucked my way back to my lever, holding the plot cord. I put it in my teeth, levered the back of the quad out of the mud, and strained my neck back, pulling the cord and throttling the quad and HALLELUJAH, it worked!

'That thing shot off the stump like it was possessed, yanking the plot cord out of my teeth as I let out a scream of victory like I'd just speared my first woolly mammoth. It was amazing... I had won! I was a hero... the best tree planting foreman who had ever lived!'

The tent was full of smiles, congratulations, and probably a few eye rolls. My brother was always coming up with some new proof of his supremacy - I don't know if I've ever known a more competitive dude. He wasn't done, though.

'I got cut off mid-scream, though,' he said, his voice dropping and then rising steadily as he delivered the punch line. 'That stupid plot cord got wrapped tight around the throttle and stuck in the on position, and without me to weight it down, the quad skittered another twenty-five feet over the top of the mud towards the bushline, where it proceeded to get high-centered, again, on another stump.'

Everybody laughed, at that, because the only thing better than a the best tree planting foreman who ever lived is a guy who, as the Australians might say, 'knows how to take the piss out of himself.' "

With that, I finished my story. The student who'd asked the question was a bit incredulous.

"I don't know," I said, "but it did, and by then he'd done the hard part of figuring out a system for creatively solving the problem, so he was out in no time.

"Look, the important thing to get from that story," I said, "is that every problem you encounter in life is just an opportunity to learn something and to grow. So, the next time you're tempted to latch onto the first excuse you can think of for why you had to quit in the face of adversity, just remember that. Now, where were we? Oh, yeah, right... photography class. Nice."

* If any my Graphic Design/Photography students read this, they'll immediately realize I've tidied up the narrative a bit. This may lead them to perhaps think that I am, in fact, an incorrigible liar. To which I say, "Absolutely, you young hooligans! For art is nothing if not magic lies, and I have every intention of becoming one of the most magical liars of all."

** In the article linked there, Dr. Alastair Hodges (an old planting buddy of mine) contends that tree planters burn slightly double the 2,300-2,400 calories consumed in a day by marathon runners - every single day of the summer!

*** A "heli-block" is a cut-block that, for one reason or another, is not accessible by trucks - so boxes of seedlings and planters are flown in by helicopter. In rare cases, they'll drop in an ATV, or 'quad', to help move trees around. Sometimes, the foreman will then be asked to ride the quad out at the end of the day.

**** "Deactivated" roads are roads that have had trenches cut out of them to prevent erosion so that they could conceivably be "re-activated" someday in the future. It doesn't always work. "Seismics" are lines cut through the forest for miles and miles for oil-finding exploration. Oil companies then go down the lines setting off mini-explosions, which are then read by seismographs to determine the presence of oil deep underground.

***** A "plot cord" is a standard-length (3.99 meters, if I remember correctly) cord used to spin plots. Count the trees in a few plot circles, do a little math, and presto! you have a rough idea of how many stems you've planted per hectare - an essential aspect of getting paid for completing a contract.
Labels: art