how to create your very own hell

Jesus is in Hell today.

Not Protestant Jesus (because Protestants skip over this bit); but rather, Orthodox Jesus - who is different.

On Easter Saturday, I am told, Orthodox Jesus goes to Hell. Like me, I guess.

As a young fundagelical, I was taught that God has an actual book, and that the only way I'd skip out on eternal torment in the Hell I deserved is if God had at some point taken up God's pen (which is, of course, a gold-tipped goose-quill) and written my name on its pages. There was a debate, of course, as to whether God was in possession of an eraser, but for my parents and a lot of the people I knew, that goose-quill used only indelible ink.

I learned that if I wanted to be sure of that indelible quill-flick, all I had to do was say a few words - following the four-step procedure that had been developed by, I dunno, John Edwards - and Presto-Bango... I was in!

This may sound like a get-out-of-jail-free card, but it isn't, because I was also taught that I couldn't take the Almighty Quill-Flick as a License to Licentiousness. Paul the Apostle had fixed that loophole in a hurry, essentially arguing that the few words you said didn't count unless you really, really meant them, and that if you really, really meant them, it would be obvious to everybody because you'd stop screwing up quite so much.

Paul the Apostle had obviously taken Intro to Logic (a course I nearly failed at University, and only in part because the teacher was a giddy rabbit-trailer who was more interested in pointing out his credit in our textbook than actually teaching anything). Logic allows people with very mathematically-oriented minds to say confusing things that sorta-kinda sound right, but which Artist-People such as myself take as an opportunity to smack ourselves in the forehead with a two-by-four.

You see, Artist-People such as myself spend maybe eighty-six percent of their conscious time questioning and double-questioning their motivation for anything, so a wholesale acceptance of Paul's teaching means that a large portion of my mental energy then got spent on trying to close the metaphysical loop of Intention/Causality/Action. Did I really, really mean it when I said those few words? I seemed to keep screwing up, so maybe I hadn't?

How, then (knowing that when I had said those few words the first time I had certainly been convinced that I had really, really meant them) could I say them this time so that I would know for certain it was for realsies? I have always been exceptionally good at self-deception, so how would I ever know?

For a while, I attended a Pentecostal church, where the solution was to turn on smoke machines (yes, really), play an organ soft and low, and have some slick-tongued car salesman ease me into a state of emotional vulnerability so that I really, really felt like I meant it. The problem with this little trick is that the emotions would fade, and the holistic part of my Artist-Person-Self that wanted to incorporate my Reasoning Mind into the choices I was making would flare up and say, "No, suckah... you didn't really, really mean it... you only felt it. For it to count, you've gotta somehow incorporate your Whole Self into those few words." So it was back to church for another round of smoke machines and mirrors.

Another problem that arose from this is that I was simultaneously wrestling (unsuccessfully) to come to an understanding of what my Whole Self actually was. The questions were growing bigger by the second. My walnut-sized brain was gradually seizing, as my pea-sized lizard-brain was engaging my primal fight-or-flight instincts, driving me to abandon the questions and hide behind bastions of right-action or right-behavior... which were all, essentially, just fear-prompted defense mechanisms. 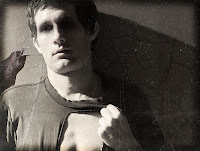 What's more, they did not work. I kept screwing up.

Fortunately, John Calvin came along and sewed up all the remaining moth-holes by saying that if you said those few words and really, really meant them, it was only because God had ordained that you would say and really, really mean them. You were likely to screw up, still, but if you had been chosen, your screw-ups would gradually diminish in quantity and severity, because God was doing something called "sanctification"... which was essentially the process of perfecting you out of your truly horrendous current state, so you'd be less contemptible for that last, final holiness push into heaven.

Just like that, Presto-Bango! I was relieved of the pressure of ultimate free-agency.

This would at first seem to solve the Artist-Person's problem, because the Intention/Causality/Action conundrums basically became God's problem - not mine. Which is nice, I suppose, if you've got enough internal evidence that you're one of the chosen. I, sadly, did not. Rather, like Paul the Apostle, I found that no matter how hard I tried, the severity and quantity of my screw-ups was actually increasing, sending me downward in an ever-accelerating cycle of fear and self-loathing.

For a long time, I went into autopilot, choosing to coast down the "flight" option of the fight-or-flight instinct, hoping that in time everything would sort itself out - that I would stop screwing up quite so much and thereby prove once and for all that either I'd really, really meant it, or that I was, in fact, one of the chosen.

Unlike those transcontinental marvels of modern aviation the jet-planes, however, my human autopilot-of-fear was not capable of managing my behavior indefinitely. I ran out of fuel and then spiraled down into the ground. Crash-and-burn. Bye-bye marriage. Bye-bye illusions of self-esteem and self-control.

And in their place? Nothing.

It was at this point that I attended an AA meeting with a childhood friend, and "found God at the bottom of someone else's bottle." In the simple, stripped-down message of AA, I found an answer that did not require the resolution of all my questions... just the call to admit that I wasn't really able to handle things on my own. I needed a community of broken, humbled people such as myself to encourage me, and I needed a Higher Power (that I did not have to slice-and-dice into neat little boxes) to lift me up and give me a hug - to love me with the love I, as yet, had not learned to give to myself.

As time went by, I learned in small ways to accept that I was lovable. I came to see the beauty and the joy and the artistry of who Jesus was and what he did, and to accept that the Amazing Grace he portrayed were the release I needed from the guilt and shame I felt over my endless cycle of screw-ups.

I came to believe in a God who was an Artist - a bounteous creator of joyous things - and began to wonder if perhaps the Hell I was so afraid of was something I was contributing to... was creating, here and now - one fear-driven, un-loving action at a time.

Guess what, though? I still did not stop screwing up. I was still afraid. I still kept right on sabotaging relationships, allowing my fear to get in the way of love. Most recently, for example, I took a delicate bird of unconditional love that I'd been nurturing through a sweet, lyrical correspondence with a woman, and I squeezed it so tightly that I wounded it - perhaps mortally.

It is after screw-ups like this that I am tempted to fall back into my (perhaps misinterpreted) Pauline/Calvinist reading of the world - to feel the hot, licking flames of a Hell beyond the one I have just created in my head, and then to damn myself to it.

But just when I'm about to give up - to wallow back down into the burning mire of self-hatred I'd thought I'd left behind - I hear laughter. Divine laughter. At me. Or rather, with me. And suddenly, I remember again that God is an Artist, and that good art is nothing if not funny; because humor is found in the unexpected - in the gap between expectation and reality.

I remember that it's not over yet. The painting is not finished. The tapestry isn't done. The music still plays, and the dance still continues into the blackness of infinity. I am not alone, and the Hell I live in will be destroyed, once and forever, by love, love, and more Love.