How to Fall in Love with a Woman 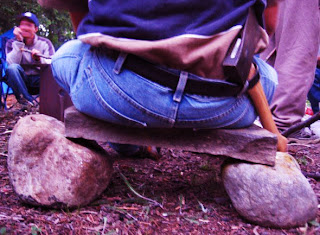 Allow myself to quote (er) myself on a few key points, to give the gist of where I am coming from.

First, on loving a chair:


"If, by drawing it, you can take the time to slow down enough to really see a flower, an eye, or a chair, then what you are doing is expressing love for them. You are saying, in a sense, that they are worth the time you must expend in your effort to see them.

In doing this, you fall in love. You set yourself aside and - in dying to yourself - begin to come alive to the wonder that is the world around you."

And then, on loving yourself:


"The reason we do not love chairs, other people, or butterflies is that we are afraid there is not enough love in the world for everyone—leastwise, not us.  We are afraid that by giving away our time, ourselves and our love, we are somehow diminishing. In a sense, this is true. But what is diminishing is not the real us, but a puffed-up illusion, created in the moment of fear.  The real us—the us that yearns to BE—can only come alive when we die to our false self, shuffle off our fear, and live in the awareness of the loveliness of everybody and everything else. In those moments, the suckiness falls away and the beauty shines so brightly all around us that it becomes a mirror that reveals our own loveliness."

Now, I wanna show off my ability to blah-blah-blah-blather, by talking about one of the things of which I am perhaps most especially ignorant: falling in love with (in my case) a woman.

I'm not sure I ever understood what this "falling in love" thing was supposed to mean. Walt Disney told me I'd know it when it happened; but either it didn't ever happen, or I was somehow too dense to notice when it did. Sure, I've had times when I wanted to spend my every waking moment getting to know someone, but there seemed always to be a part of my mind that sat back off to one side, rolling its mind-eyes at the absurdity of it all. The utter abandonment I'd heard about never seemed to manifest.

Last year, a woman told me that what I was describing was merely infatuation, and that there was something more transcendent. She told me I'd "just know it" when it happened.

And I thought... bollocks.

It seemed, rather, to my paradoxically hyper-rational/creative mind, that what she was describing was the sort of story people tell themselves afterwards, to justify the mind-bogglingly stupid things they often do when their pheromones start to go haywire. At least, that is what I told myself to avoid facing the possibility that I just happened to be wired wrong - destined to miss out on Hollywood's worst-kept secret... forever (insert thunderclap of doom).

Over this past week, though, I've been chatting online with this lovely, brilliant, pixie-ish little woman in Hawaii, whom I'll call Luau-Lady. For some reason, she reminded me of a girl I knew my final year in college - the first woman for whom, I think, I really went batschizzle bananas. Luau-Lady, like Banana-Girl, is the sort of person who loves openly the people around her. She's sort of an elemental, transient thing; like the call of a bird echoing through the jungle; or a fine mist of sea-spray, catching the sunbeams of a moment and then drifting away.

As I wrote to her, I started to feel some of what I'd felt in college, when I'd first spotted Banana-Girl swinging like a monkey from a rope at a public pool, chattering like she'd meant it. Banana-Girl was beautiful, sure, but she was also just... her. I wrote to Luau-Lady, thought of Banana-Girl, and began to wonder, again, what it actually means to fall in love.

I still don't think I ever really "fell in love" with Banana-Girl.

Nonetheless, the first time we ever sat down to talk, it lasted for six frickin' hours. It was electric, and I was drained to my chitlins. Nonetheless, there was something that held me back - that kept me from quite giving in to the feelings of the moment. I somehow could not bring myself to just enjoy it... to release myself into the experience without needing to define or control what, exactly, it was becoming.

A friend of mine from acting class met Banana-Girl, and started to "like" her, so I ran away without ever letting him (or her) know what I had been feeling. That following summer, Banana-Girl went away tree-planting with Actor-Man, while I lay in my tent in my own tree-planting camp, staring at the picture she'd given me of herself and writing self-flagellating poetry such as the following:


I saw her as the day died.
She was sunlight, and alive.
She told me of her past, in the north, in the woods
and how she loved to feel the sun upon her face.
In that place, I imagined traces of her golden hair,
floating on feathered fingers of the breeze.

I told her that I, too, would eat the outside if I could.
Away from the rattle and hum
of a paved-over world
the only sounds would be the waves and whisperings
of other wild things,

the sounds of singing in a dream.

I saw her as the day died.
She was sunlight, and alive...

When the summer was over, Banana-Girl and Actor-Man decided to get married. Just like that. And somehow I knew - knew - that it was all right. He, too, was the sort of person who grasped life loosely... who did not need to box and name everything around him. Whereas I, I discovered (wriggling deeper into my little cocoon of self-loathing), was a worm.

It is now twelve years since that time.

Banana-Girl and Actor-Man are still married, and have lived a beautiful, whimsical life together. And I, having been beaten about the corporeals by years of relational pain and then the agonizing death of my own marriage, have finally begun to learn a little bit, I think, of what it means to fall in love with a woman.

I have concluded that it is similar, in some ways, to falling in love with a chair... or yourself. I have concluded that to fall in love with a woman you have to abandon fear, and hush the voice that screams for you to control the moment and make it into what you envision it to be, instead of what it already IS. I have begun to learn that to really, really love a woman, you've just got to let her fly free. You've got to let her BE, realizing that there is already enough love, right there in front of you.

There is no magic sort of person, destined for fairy tales.

There are, however, people who will stare that fear in the face, blink, and then just get lost in the wonder of it all. I have talked with Actor-Man and Banana-Girl about those moments so long ago, and have learned that they, like me, were scared of the possibilities. They, too, were young and stupid and unsure. But they were willing to release the handlebars and coast the Motorcycle of Love off a cliff - to take the risk, I guess, of a "near-life experience."

So... I'm going to relax. No more freakin' out on Luau-Lady because I'm afraid of not being able to put her into a box. I'm going to continue to write to her, others, and you - sure - but I am going to remember to breathe. I am going to reclaim my faith that there is enough love in the world, without my having to grasp after it.

I am not meant to live in the hypotheticals, wandering around in my mind looking for a little more love. I am meant for wonderment, and life. Real life, today.

I am meant for falling in love.

One day at a time.