peace to the galaxy 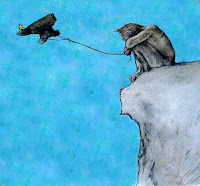 Contrary to what we are taught at the School of Hallmark, children are vicious little urchins. Ask anyone with kids - or, at least, anyone with little boys. My son's barely four, and hardly a day goes by when he doesn't express a desire to shoot and kill someone... usually those he deems "bad guys."

This, as you can imagine, tends to bother my pinko-commie-pacifist self; and unfortunately, as a (qualified) pacifist, I can't exactly use force to get him to stop the violence.

Instead, I've carried out a long and patient campaign of meeting any murderous comments with a counter-offer: typically, that instead of shooting the bad guys, we try talking to them to see what they're so angry about. Then, I suggest that perhaps we might think of something kind that we could do for them to defuse the situation.

I know, I know - this is the sort of eye-rolling stuff of which tortured late-life memoirs or made. But get this... it may be working! This morning, my son and I were hiding in the fort I built for him, apparently from some bad guys, when all of a sudden he suggested - without any prompting from me - that we climb down and make a surprise pretend dinner for these bad guys. So we did, and he even got me to whip up a pretend birthday cake.

What does this prove? Well, it proves that kids will do anything for the approval of their parents, obviously. What kid in his right mind wants to make a birthday cake for the bad guys? Nonetheless, it's a step. And one day, when my son's responsible for bringing peace to the galaxy, you'll all know whom to thank.
Labels: parenting war