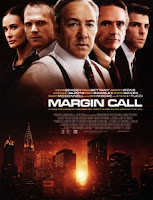 In the 2011 film "Margin Call," Paul Bettany plays the character of Will Emerson: a conflicted, ruthless, nearly-suicidal stock trader who participates in the first big sell-off that sparked the current global economic meltdown. In a conversation with a younger trader, who's just expressed concern over what they're about to do, Bettany delivers a monologue that I figure has to be just about the most concise, damning assessment of the mindset of the wealthy (that is to say, us) that I've heard in a long while. It's so good, that despite the sometimes blue language, I'm gonna reprint it right here.

WILL EMERSON "Look, If you want to do this with your life, and do it well, you need to believe that you are necessary. And you are. If people want to live like this--with their big cars and these houses that they haven’t even paid for--then you are necessary. The only reason they can continue to live like kings is because we’ve got our fingers on the scale in THEIR favor. And if I were to take my finger off... Then the whole world gets really f-----g fair, really f-----g quickly. And no one wants that, they say they do...but they don’t. They want what we’re giving them, but they also want to play innocent and pretend they have no idea how we get it. And that’s more hypocrisy than I can swallow. So f--- them."


The best storytelling does not loudly proclaim that something's evil. It gets inside the evil and lets you feel the compelling allure of its twisted logic so that you'll know - KNOW - that there but for the grace of God go you. It's a solid movie. Watch it.
Labels: consumerism film