the flipside of fear 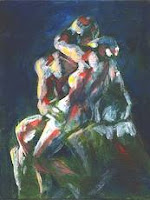 It has its highs, its dopamine spikes, its exuberant joys, sure; but taken as a whole, it seems to me that Love is a low, dull, throb that pulses through the marrow of the universe. Love is a kind, healing, patient, and ultimately creative force; doing its slow, eternal work on the mitochondrial level, or deeper.  "It takes a looooong time," the Ents might say, "to say anything in Love."

A week ago I left a comment on a blog I follow, suggesting that the author of said blog had veered a bit too violently into Name-Calling-Land... a place I find counter-productive to the slow, boring work of Love. Because his blog is immensely popular, and because I happened to have scored "first comment," I was immediately attacked by a great number of people, who accused me of everything from "concern trolling" to "exorbitant use of punctuation."

I was not trying to be a troll. One of the reasons I like this dude's blog in the first place is that he points out a lot of seriously problematic behaviors that I think ought to be criticized. I just get uncomfortable when it goes from a critique of behavior to the characterization of another person or group of people as the thing that they are doing. When I tried to come back in the comments and explain this, the barbs started flying again and I was reminded in no uncertain terms that I, like all those Other Christians, am an insufferable, sanctimonious jerk.

The internet is not, I think, interested in the slow work of love. It wants drama. It wants passion. It wants sound bytes. And as alluring as all that is, I am finding it very, very tiring.

So I left the comment war, rolled my eyes when the blog author dedicated his next post to explaining why it is a good Christian's duty to call some people "a**holes," and spent the next several days feeling emotionally beleaguered by the injustice of it all. I'd been accused of the opposite of my intention - which was to promote love - and it hurt.

Then yesterday, I sat down for a chat with my boss, the principal of the school where I teach. He told me that something I'd written a year ago made him feel that I was attacking him and the organization of which he is a part, the church to which our school is attached. He said he felt, for lack of a better word, "offended." 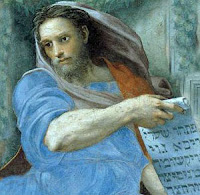 Now, I know all about the fine tradition of Artists-as-Prophets, and I know that Jesus himself was famous for "offending them one and all." But I also know this man, my boss. For three and a half years, I have watched him love people. I have watched him extend grace to kids whom I'd probably have long-since given the boot. I have experienced this man giving me grace, allowing me to stay on when parents have howled for my resignation, and supporting me through the devastation of the end of my marriage. I know this man; so I listened, and what I heard in his voice was a bit of the same feeling I'd experienced in that blog discussion - a feeling of deep frustration at being misunderstood and mis-characterized.

My boss is not a perfect man. He admits this, readily. He also sees the world very, very differently than I do. But despite his imperfections and our differences, he is not a particularly hard man to love - probably (I think) because he has worked so hard to make love a defining characteristic of his life. I have seen this love, and I know that it is real.

So I listened, and I thought about all that I have written on here - the hundreds of thousands of words I have arranged in my pursuit of Love, Truth, God, Jesus and all that jazz; and I realized that there have been times when, bored with the slow pace of love, I have attempted to tweak my words in such away as to provoke - not out of a genuine love and desire for the creative healing of a world in pain - but rather out of a desire to get more attention for this blog... for myself.

In short, I've taken shortcuts. I've forgotten, in the words of Tielhard de Chardin, to "above all, trust in the slow work of God." Instead, I have attempted to speed things up a little bit by pointing to other people and pretending to a sort of knowledge that, in reality, I cannot have. I cannot know other people's hearts. But I've pretended that I do, and in so doing have turned them into Things.

For a long, long time, I have used this blog to trace the ways in which I have allowed fear to control my actions. I have rooted out this fear as I have written about my faith, sexual identity, relationships - all of it. This is a good thing, to be sure. But the problem, as I see it, is that in so doing I have sometimes ignored the flipside of fear, which is pride.

It's time for a shift in focus.

So consider this post an apology... and a promise.

I don't want to position myself, any more, in a place of pride. I want to root out the false humility that has lead me to do the very thing I hate the most: to "thingify" other people. I want to be a part of something better, something that seeks to build not by destroying what is bad, but by affirming what is good - believing in faith that Creative Love is the side that's gonna win in this mad-house dialectical broo-ha-hah we call life.

I'll be as snarky as ever, probably - but now, hopefully, with a focus on redemption and the slow, boring work of Love.
Labels: identity Jesus