scare the quit out of them 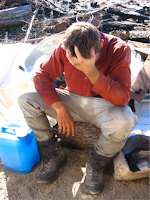 Back when I was interviewing young men and women for production tree-planting (one of the most miserable, horrendous, soul-crushingly-wonderful summer jobs on God's green earth), the very first thing I tried to do was to convince them they didn't want the job - that there were a million reasons to run away and never look back. I told them of the horrors of inescapable exposure to rain and hail and sleet and snow; of the deprivations; of heat exhaustion; of over-long days; and of estrangement from friends and slurpees and mid-summer matinees.

I didn't do this because I did not like them and did not wish to work with them - I was interviewing them, after all, because I'd seen their resume and thought they looked promising. Neither did I hate tree-planting. Some of the best times and most valuable lessons of my life came from tree-planting. The job shaped me in ways that nothing else could, and I wouldn't trade my ten summers in planting for anything.

On the contrary - I tried to scare them out of tree-planting because I knew what it would cost them, and I knew there was no way for them to know what it would be like until they were right there in the thick of it. I cared for them, and I did not want them to move forward until I'd done my best to make them understand the price they'd have to pay, and to figure out if they were the sort who'd be willing to pay it... Because if they weren't, they would not grow to love the job, as I had. They would grow to hate it, and their summer could very well end in failure.

I was wondering today what it would be like if premarital counseling was actually conducted with that mindset. I do not think this happens very often. I think, rather, that counselors tend to see their role as being to help these two wondrously autonomous individuals iron out a few rough edges that - let's face it - simply cannot be truly dealt with until you are actually there, in the thick of it.

Perhaps it's a business decision. It seems unlikely in this cultural climate that a counselor known for talking people out of getting married would get too many referrals.

Here's what I do know - while a lot of people quit during their first tree planting season, in six years of leading crew after crew through some of the most horrendous working conditions available to a late-teens Canadian, I never, ever had anyone quit. My advice to would-be counselors, therefore, is this: scare the living quit out of your clients, and don't ever regret it.
Labels: relationships work