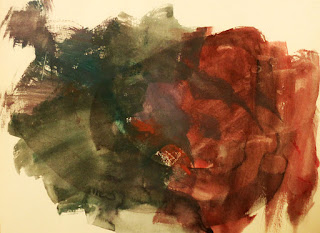 My son fancies himself a bit of a painter, but I gotta say that sometimes his attempts are a bit weak. There are flashes of brilliance, sure; but I had been hoping that now that he's made it over that four-year hump, he'd start pulling it off a bit more consistently. Not the case.

Take this piece from our session this weekend. Not terrible, mind - and definitely reminiscent of some of the better work by Anselm Keifer - but still a bit muddy and directionless. 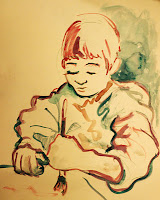 So, while he's working on his piece and I'm sitting there doing this slap-dash little portrait and passive-aggressively insinuating that he might want to slow it down with the paint-mixing, I suddenly have this epiphany:

Sure, he's over-mixing like mad; demanding that you squeeze more and more colors onto his palette as he works himself into a frenzy of discoloration; but in the end, if what I've done is squelched his joy at the act of creation, then who gives a rat's left earlobe?

Besides... what if I'm wrong? Perhaps he is aware that mixing colors has a neutralizing effect. Maybe he knows it and is ignoring it, creating a new style that fuses action painting with color field painting in order to echo the despair that infused the post-WWII art world, whilst at the same time saying something new and exciting about the struggle to wrest meaning from the endless distractions of a po-mo world. Or maybe he's just going through a nihilist phase... who knows?


The important thing is that I've got to let it go. He's his own little man and sometimes, to be a good father, I've gotta let him spread his little wings and fly. 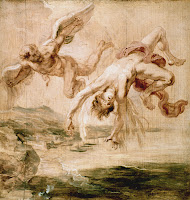 But then I think... wait a minute, what about that Icarus guy? His father let him spread his wings, and look what happened.

This question - this mix-muddling of paint - becomes of vital importance. I am torn between the need to let him make his own mistakes (if, indeed, that's what they are), and the desire to show him that by not mixing the colors quite so much, he allows each one to retain a bit more of its original beauty.

I ask myself: how do I distinguish between a destructive desire to overwhelm his will with the force of my supposed "rightness," and a healthy acknowledgement and acceptance of the responsibility of fatherhood? It is not an easy question. There is no simple, one-size-fits-every-situation kind of answer. Eventually, it starts to come down to why I'm wanting to redirect him in the first place. One moment I'm lovingly tapping him toward the light with the wooden spoon of justice, and the next, I'm just hittin' for the fun of it.

Suddenly it matters - maybe more than anything else, ever - whether or not I keep squeezing out the paint and letting him "ruin" his masterpiece. How the Sam Hill am I gonna know what's the right thing to do here, when I barely even know my own motivation for doing it?

Then I get it. The answer. Because the answer's right there in the question: I don't know, I can't know, and the best way to have the best chance of doing what's right is to acknowledge that. The kid may be veering madly off on a trajectory that's going to end up with him living in some SoHo dive doing installation work with popcorn that only him and the rats he has for bedfellows are ever gonna see, but that's not really my concern. My concern is maintaining the humility to admit that I am ignorant of outcomes, so that pride can take a backseat to love.

He demands a bit more blue. I give it to him. And when he is finished, I take both our paintings and magnetize them, side-by-side, to the refrigerator.
Labels: painting parenting