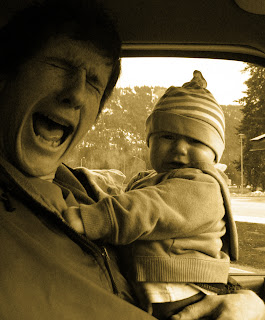 There are times when I know a radio program will annoy me, but I listen to it anyways because I want to be as aware as possible of who the idiots are (not me, of course - never me).

Times like, say, whenever I tune to conservative talk radio; and sometimes late at night, when I'll beat driver's boredom by listening to a little hellfire & brimstone Baptist shouting.

This morning when the NPR dude announced on my drive to work that they'd be talking next about the "Science of Tantrums," my hand moved to the dial. I had a pretty good idea what was coming next, but at the last moment I pulled my hand back, deciding to give them the opportunity to annoy me. They did not disappoint.

The first thing they said was that never before in the history of the world had the "hard sciences" taken such a close look at tantrums, and then they went on to talk about the tantrum-research of a couple of psychologists. Bad opening gambit, my friends: psychology is most definitely not a hard science.

That's not just me talking, though. Even though the distinction between "hard" and "soft" sciences is sometimes fuzzy and there are gradations within the two, psychology sits squarely in the realm of the "soft" social sciences because it has long been broadly-acknowledged that there are far too many variables at play to draw the sort of hard, verifiable conclusions you would get with something like, say, particle physics. I like this distinction, and I like it on an emotional level; because while science is awesome and can endlessly teach us about so many aspects of the human experience, I do not believe that it is in the position to "explain it all away." People are too complex and awesome to be reduced to bits of data.

I may be overreacting. It could have been that the NPR announcer just made a mistake - but I don't think so. I have noticed a broad-spectrum trend in the last while to claim "hard-science" status for psychology, and I think it is the manifestation of a worldview that wishes to completely demystify the human experience - to reduce it to a series of ones and zeros.

In this particular case, the attempt to hard-sciencifize psychology came off as laughable, as the psychologist went on to describe his data-gathering in some seriously affected, up-selling language, saying something to the effect that "we devised an apparatus whereby we affixed a high-quality recording device to a onesie, and the parents were then able to activate it using an on-switch, at which point we blah-blah-blah-oo-oo-ee-ee-can I have a banana?"

I almost think I heard him laughing a little as he said it - as though he were aware of how silly he sounded. There is nothing silly or funny, however, about re-defining words in the name of politics.

And what evidence do I have that this trend is happening, even on good-ole NPR(smirk)? Well none, of course - I'm not a frickin' scientist.
Labels: politics