A Minor in Art

Although it violates the concerns of post-representative abstractification, not everyone has enjoyed the privilege of an extensive education in the visual arts, so I have decided to provide something of an explanation for the work below:

This piece was created with an intentional eye to reproducing the illusion of the innocence of youth. In it, the artist [my son] played with the gap between expectation and desire, brilliantly exploring a multi-dimensional concept within the confines of two-dimensional space - in essence arguing for the primacy of emotional response to events perceived.

The emotional vista of the human psyche and soul are, obviously, a domain of irreducible complexity, not suffering well the transfer to the more linear, temporal paroxysms of symbolic language. Nonetheless, for the sake of brevity I will merely conjecture that this particular piece is intended to explore the parameters of the emotion roughly categorized as "fear," and to enliven the debate over the paradoxical and sometimes symbiotic relationship of this emotion to the conceptual boundaries of "pleasure." 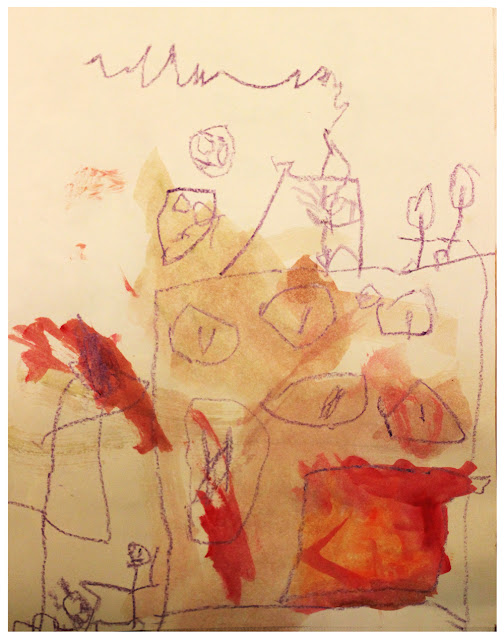 Although the artist's own interpretation is, of course, irrelevant, I find it sometimes illuminating to record said interpretation for the purposes of understanding process and the socio-cultural context of the the art-making endeavor. Ergo, in his own words (paraphrased):

"It's a Halloween house. There's a dog who's biting the trick-or-treat candy [lower left], and those are ghosts [upper left]. That's Lulua [cousin] on the roof, fixing the chim-minny, and that's Roman and Hiccup [step-brother, and character in "How to Train your Dragon", upper right].
Labels: art