not quite all there 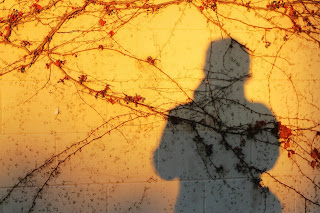 I know I'm a writer when I walk up to the gorgeous blonde TSA agent and my very first thought is, "I'm gonna to have to remember to write that you know you're in Los Angeles when even the TSA agents look like movie stars."

I don't say it out loud, of course. I'm a writer, after all, not an actor.

So what if she's flashing a million-dollar smile at me and my ridiculously cute son? So what if it's midnight and the place is deserted and there's no rush; and so what if I've got nothing to lose and who-knows-what to gain with a little flirtatious repartee? That's not the point. The point is: I'm a writer. A writer's life is not for living, it's for collecting.

Sometimes I wonder if I've ever actually been anywhere. Not in the comparative sense, like, "between the two of them, my brother and sister have traveled to about half the countries on the planet (true story); but I've never been anywhere." Rather, more like I've never actually been any place where I've actually been, because even though I've been more places and seen more things than your average yak-herder or amazonian villager, I really have spent most of those traveling-times somewhere else completely -- the inside of my head.

I'm reminded of the way Sir Ken Robinson describes University professors, whom he says "look upon their body as a form of transport for their heads." It's not just professors who live like this, though, it's writers and perhaps even all other artists, as well. Maybe that's why so many writers end up miserable and alone (and maybe alcoholic, for good measure). Maybe by the time they've written well enough that women start to chase them down, they've had so little practice at actually living in their bodies where they are that they can never quite get the hang of relating to a real, live, human woman.

We're an odd lot, us writers and creatives, and pretty much all introverts. As Jonathan Rauch said in his brilliant Atlantic Monthly piece, "Caring for Your Introvert," being an introvert isn't about being shy. "Shy people are anxious or frightened or self-excoriating in social settings; introverts generally are not," Rauch says, "Introverts are also not misanthropic, though some of us do go along with Sartre as far as to say 'Hell is other people at breakfast.' Rather, introverts are people who find other people tiring." People -- and, I would argue, life in general. So we retreat into our heads, fabricating worlds where we don't have to struggle through the wearying performance that is social engagement. It's unsurprising that Rauch goes on to say that many, many introverts are very successful actors.

Maybe that's why I find Christmas to be such a tiring, depressing time of year. Because then, of all times, it seems as though we are supposed to be happy - to live with perpetual smiles on our faces as though we are actually there (wherever that might be) instead of off somewhere inside our heads, rewriting whatever it is that just happened.

To an extrovert, I'm sure that what I've just described seems incomprehensibly horrendous... and sometimes it is. But I'd be willing to bet a large collection of Iranian dance music that no authentic extrovert ever made much art worth experiencing, because making art well requires a person to be very comfortable within his or her own head, for very, very long periods of time. It is only there, in fact -- in the making-space of my own mind -- that I ever actually feel truly and completely present.

I used to think that everybody was the same; that extroverts were just too cowardly to stop and listen to their own inner monologue. Now -- although I still don't believe there are ever anything but the most hazy of lines between types of people -- I'm willing to let them be different.  I'm willing to allow them to have their own, more holistic (if, to me, less interesting) reality. I have come to believe that I'm wired the way I am for a reason: so that I'll be better at making stuff that other people can't; so that I can express the inexpressible and help provide stories that bring joy and help make sense of this madhouse we call life.

And even though it sucks that I don't get to develop a poetic and tortured long-distance relationship with the lovely lady with the badge and pen who looked at my ID and marked my ticket two days ago, I can still imagine that she used that pen after I left to write down my name, google-search it, find this blog, and start following.

Who knows, one day maybe I'll write that into a story, and make it true.

Author's note: while I did, in fact, briefly entertain the hope that said TSA agent would write down my name and stalk me on the internets (yes, I am that pathetic), this post was still meant to be funny. So please, don't forward my name and picture to all the single women you know. I've got a girlfriend. Her name is Mya Writing, and she and I are pretty serious right now.
Labels: identity writing