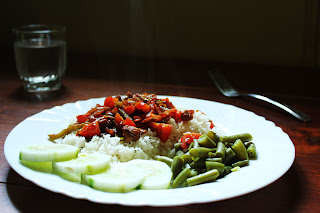 I wouldn't go so far as to say that all vegetarians are deranged, but it occurs to me that it is possible there is a touch of lunacy that goes hand-in-hand with the practice. Now, before any vegetarians start emailing me rotten tomato viruses in disgust, let me add that despite my conviction that all granola-crunchers are, themselves, a little nutty, I still believe that everyone ought to become a vegetarian. In fact, I've spent the past couple of years trying to convince myself to swear off the eating of meat.

You'd think that with the soft spot I have for living things (and most especially animals of the furry and feathered varieties), that I would have long since given up the consumption of other creature's muscle. You'd think. But like vegetarians, I am a self-deluded hypocrite who prefers to ignore certain realities, rather than deal with the world as it actually is.

Let me back up, and tell you why I think vegetarians are out of touch with reality. It is my impression that most vegetarians become so largely because they don't like the idea that other animals should die bloody deaths so that they can live. The problem with this theory is that even the former-hippie mega-farmers who grow the roughage vegetarians depend on still have to find nice, organic ways to kill the pests that will inevitably otherwise beat them to it, and there are pests uniquely adapted to any vegetation one might try to grow for consumption. Take, for example, tomatoes. There is a big, fat, juicy green caterpillar that eats tomatoes and only tomatoes, and even if all you did was walk around hand-picking them off your plants and re-locating them to a happy little meadow in the woods, you would still be killing them. Just more slowly.

Or take peaches. I love-love-love peaches, and I love that we now have three decent peach trees here on our property. But if I don't spray for pests (and I don't, generally), then most of the peaches will be consumed by mold (which is alive). What is more, I find that any that actually make it through to succulent golden-honey perfection will inevitably be eaten by squirrels. And with so many large oak trees on the premises, there are squirrels everywhere. They eat not only our peaches, but our plums and pears as well.

Did I mention how much I love peaches? So, I have a choice... either I shoot the squirrels and eat my own peaches, or I go to the store and buy peaches from somebody else so my own hands remain blood-free. Now, as I said, I'm a big softy. But I do so love peaches, and the fact that I get to pick them from my own tree. So from time to time -- like, when a particularly contemptuous squirrel decides to throw a peach pit at me from up in an oak tree (true story) -- then I will go and get out the pellet gun and acquire some fresh lunch-meat (pictured above).

I have to admit, I feel horrible about this. In fact, recent experiences with the practice have probably ensured that I'm done with it, and one dead furry woodland creature closer to the vegetarian lifestyle. It is not, however, because I feel it is somehow any more sick and wrong to do the killing myself. If anything, I think it better to take moral responsibility for your meat-eating. Killing is an ugly thing, and if you've never personally cut the head off a chicken, I don't think you have any business blithely stuffing its unrecognizably-processed muscular tissue in between two slabs of bread and biting down.

Citified, grocery-store-dependent vegetarians, likewise, have no business making moral judgments about flesh-eaters, because they, too, are responsible for death. If you want to nit-pic, you have to admit that any time you eat anything, you are taking a living thing and ending its life before it has run its natural course. Even if you become a "fruitarian" and only eat fruit that has already fallen from the plant (good luck with that), you're still most likely killing all sorts of microorganisms with your stomach juices.

Here is one of the painful ironies of life: to live is to kill. The sort of vegetarianism that attempts to avoid killing is, then, a form of escape from reality. And yet...

And yet the fact remains that killing is ugly. It is an ugly thing to live with a "kill or be killed" mentality, and although it is the reality we are in fact faced with, I do not feel it is something we ought to take lightly. This is why, after killing a squirrel for stir-fry, I took my son over and together we said a little prayer, asking forgiveness of the squirrel for taking its life, and thanking it for giving us its meat. That might sound like hippie mumbo-jumbo to you, but I wonder how different the world might be if we took death - and life - a lot more seriously than we currently do.

Perhaps then we would think about the fact that meat (especially beef) takes waaaay more energy per pound to produce than vegetation, and that our over-dependence on animal protein has contributed massively to the wholesale destruction of this planet.  Perhaps if the killing mattered to us, we would begin to examine the ways in which our thoughtless meat-addiction has caused us to violate not only the health and dignity of the planet, but of each other as well.  Perhaps if we took our own lives more seriously, we would pay better attention to our diets and health, and maybe even begin to rely less on animal protein and more on foods that promote better overall health?

I do not know.

But it occurs to me that if vegetarianism is crazy, then it might just be the sort of crazy we humans could use a lot more of.
Labels: food