Film Review: As It Is in Heaven 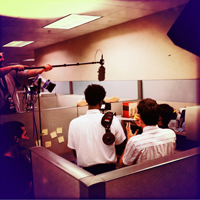 If you were raised, as I was, in the folds of the fundagelical Christian subculture, you were no doubt taught to think of the film industry as some sort of insidious bogeyman. If you watched movies at all, you were very particular about which, knowing as you did that R-rated movies were a sin, and that if you watched too many of the wrong films, moral disease would most likely worm its way in and implant its incurable, cancerous lesions on the surface of your brain.

Such is the bizarre, illogical world of a group of people that freaks out if a character in a movie even mentions sex between anyone other than a husband and wife, and yet holds as Holy Scripture a book where two sisters get their dad flat drunk and then basically rape him. People don't have sex because they once saw someone do it in a movie... they have sex because it is in their nature to want to. Although I believe it is a good thing to be clear about the difference between healthy and unhealthy contexts for sexual expression, it is dishonest to pretend that the desire for heaps of crazy sex is something only wicked people (whomever they are) ever experience.
My own parents weren’t so hypocritical, but the influence was still there. I suppose it’s only natural, then, that as an artist I would be drawn to the world of filmmaking... perhaps as an act of rebellion against a position I no longer found tenable. I loved movies, and so I jumped into the study of them with great relish.
The pull of childhood is strong, though, and I felt in some vague way that to admit my love and study filmmaking was to descend into the very bowels of immorality. To act was to espouse vanity; to write scripts of a non-overtly-morally-instructive nature was to shake hands with the devil and then, perhaps, to make out with him.
Imagine my surprise when I began to discover that the best movies are, in fact, moral fables: explorations of ethics, truth and love. These movies, by abandoning the "moral high ground" of mere didacticism, often preserved the humility necessary for love to be expressed in a way unattainable by my more “high-minded” childhood instructors. Some of them even turned their unflinching moral eyes on Christianity itself, saying more about what real faith is than any of the saccharine, blatantly-pedagogical garbage the Christian subculture creates, markets, and financially supports.
“As It Is in Heaven,” the Oscar-nominated Swedish film brought to us by director Kay Pollak, is just such an exploration, drawing us inexorably into the world of internationally renowned conductor Daniel Darius, who after a stress-induced heart attack returns to the small town of his childhood to rest and gets badgered into taking over direction of the community Church choir.
Michael Nyqvist, best known internationally for his leading-man role as Mikael Blomkvist in the original “The Girl With the Dragon Tattoo” film, brings an understated intensity to the role, as a man who wanted to be let alone but found new life and meaning by catalyzing a love-awakening, through art, of many of the citizens of his childhood town.
I want you to watch this movie, so I won’t spill the beans on exactly how it does it, but the main point I want to make is that “As It Is in Heaven,” like so many other filmed stories, tells its truth not by picking some Moral Rule and beating you over the head with it, but by exploring what love actually means, lived out, in the lives of fully fleshed-out characters. A movie like this would never be made or condoned by the mainstream Christian “art” clustercuss, because it (gasp!) shows breasts, has characters who curse, and even depicts (tastefully) a situation in which two unmarried people make love to each other. There is violence, too, but that probably would not be so much of a problem. Because violence is, of course, a much less serious offense than un-married sex.
In case you don’t catch the sarcasm there, let me make it perfectly clear that I feel that this movie does a far better, more honest job of depicting what faith and love are all about than any of the schlock I’ve seen coming out of the fundagelical crap-machine. Real faith isn’t about assenting to various propositions and being nice, it’s about loving other people and doing unto them as you would have them do unto you. A Christian minister is the villain in this tale, but this is not because he is a Christian, it is because he has spent his life fabricating and maintaining the lie that we somehow win by being the best-behaved (at least, when everybody’s looking).
Thank God there are still storytellers out there with the integrity to compellingly explore these questions in fables that are both entertaining and inherently moral. I give this film two thumbs and ten toes straight up. Watch it today!
---
Article first published as Movie Review: As It Is in Heaven on Blogcritics.
Labels: review