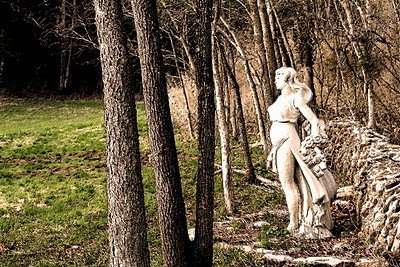 I've always had reason to be a bit suspicious of my brain. A few too many early-in-life concussions, and I tend to take the odd unexplained flashing lights or sloshing sound when I run as evidence of a defective thought-organ. I suppose one of curses of being high-order sentient is having to think about how you think.

One place my brain has always ripped me off has been with prayer. I've grown up in a culture where prayer was considered one of the essential disciplines. If you didn't pray (explicitly, out loud, in English), then you weren't really a bone-fide Christian, and if you weren't bone-fide then, well, God might love you, but he was absolutely-for-sure going to see that you were tortured in fire for all eternity. So, there was a vested interest in being good at prayer, and in doing a lot of it.

The problem was, I looked around at all the earnest people doing all their earnest street-corner praying (so to speak), and it did not really jive with my own experience. I might say one thing, see, but my brain was always doing something else. On one layer I had all the words down pat. "Dear Lord, we just want to thank you this day Father for giving us good traffic all the way from Salinas County, Lord, and for fixing Jimmy's toothache, and cetera, Lord Jesus, and cetera some more..." but on another, deeper layer I was thinking, "man, I am just doing a slam-bang job of praying here, aren't I? I am really linkin' those words together in a nice, fluid oratorical manner. Folks are gonna know I'm really, truly bone-fide."

There was one more layer, too... waaaay down deep so deep I couldn't even place it. It was saying, "I could really use a frozen popsicle right now. One of those fruit ones. My throat's a little sore, and it's so frickin' hot and earnest in this room. A popsicle... yeah, that'd hit the spot."

Three layers. One brain. Mostly, I just gave up. I said my foxhole prayers and my obligation prayers and my ha-ha better pray over this meal so God doesn't poison me ha-ha prayers, but I never really developed much of a discipline for it. Which is a bummer, really, because I believe in prayer. I think it's important. For one, I think it centers me. For two, I just do. Sort of a mystery, that.

So, recently, I figured out a way to trick my layer-cake brain, and I thought I'd pass it on to you, in case you happen to have a desire to pray and a similar brain that needs tricking. It's simple, really. All you have to do is find a way to preoccupy the top and bottom layers of your brain, so that middle layer is freed up to do some serious divine supplication.

First, the trick with the bottom layer is this: you've got to find an activity you can do without thinking, but that nonetheless takes a certain amount of concentration. It could be a musical instrument, painting, rowing... whatever. I find that driving works pretty well for me. Do that, and the bottom-most, subconscious-urges layer is pretty much managed.

For that top layer of consciousness, I've found that the best method is to have a mantra. In my case, the Lord's Prayer works splendidly, and has the added bonus of being the very thing that Jesus said to say when you pray. Since I'm trying to follow Jesus, repeating his prayer over and over is just the ticket. After that, my middle-consciousness is free to meander all over the place, talking to God about whatever has been on my mind.

None of this fixes my discipline issue. I still have to actually do it. But when I do, it's nice to be free of all that performance anxiety. Frosting on the cake, so to speak.
Labels: Jesus