i scream, you scream 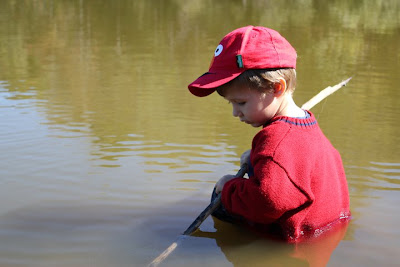 Children were invented to remind parents that they're really rather awful people.

The last time I had my three-years-and-three-months-old son over, we were sharing a small, one-dollar cuplet of ice cream. After divvying the thing up, I reached over and took another small spoonful out of his because, as I explained to him, I had given him too much and did not want to wreck his dinner... and I was making pizza.

This didn't seem to bother him much, but as he dug his green, plastic spoon into what remained, he matter-of-factly announced, "Yes, and then momma will kill you."

At first, I was unsure I had heard correctly. "What did you say?" I asked him.

"If I wreck my dinner, momma will kill you," he repeated.

I found this disturbing, and weird. "Now, Mateo," I said "That is not true and it is not a very kind thing to say. We don't joke about killing people. You need to stop talking like that."

He stopped spooning and stared, hard, at his ice cream. "No, Dadu," he replied, "you said that at the coffee shop. Momma will kill you."

And then I remembered. A week before, I had grabbed him for a fun, mid-afternoon adventure before his mother had him for a birthday party. We drove into Waxhaw, where we picked out some new/used books for him at the library bookstore, went over to the town playground for a while, and then walked to the the local coffee shop. I had promised him ice cream, but all they had was milkshakes; so I ordered two of their smallest. When they arrived bedecked in whipped cream, I realized that his milkshake was about half the size of his little head, and if I let him drink the whole thing, he would be both wired and completely full for the party. Against his objections, I drunk about two thirds of his shake because, I told him, "If you wreck your appetite for the party, your momma will kill me."

I mostly said this to make the guy sitting a few tables over from us laugh, and to feel for a moment like a normal dad, out for a treat with his son. I didn't really think about it, and I certainly didn't expect to be quoted a week later.

"Okay," I said to my son over our ice cream, "You are right. I did say that, and it was wrong. I should not have said that to you, because momma would not kill me over that, and I do not want to paint a picture for you of her as angry and violent. I am sorry. Will you forgive me?"

He thought about it for a moment. "No, no, no." He said at last, "You need to say sorry to momma." He looked at me, expectantly.

"What? You want me to call her up and apologize?"

"Yes, you need to call momma."

Under his watchful eye, I went over and grabbed the phone. It was the third time I'd called that day, and she was in the middle of party preparations. "What is it?" she asked. I could hear the frustration in her voice when she picked up the phone, but by the time I had explained the situation, she was laughing. "Okay," she said, "thanks for telling me."

I hung up. "Is that good?" I asked my son. He nodded. We ate our ice cream.
Labels: parenting