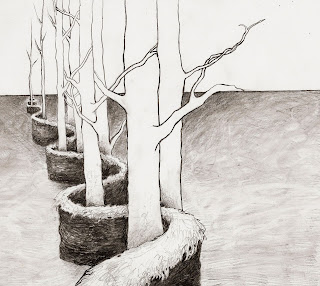 Earlier this year, I showed my students a short video on Andy Goldsworthy, a sculptor who works by re-arranging things in nature. When I asked my first-period class what they thought, one young chap in the front row replied, "I think he's got too much time on his hands."

This did not surprise me, because I have noticed that most times when someone links a cool and creative video through facebook, someone else has to take it upon himself (yes, it's always a guy) to point out that the people who made it had too much time on their hands.

I suppose these dissenters would prefer the artists to spend that time watching television programs, like a good little sheeple, or doing something more practical and highly effective, like writing a letter to a congressperson.

My guess, however, is that what really annoys these art-devaluators is that people like Andy Goldsworthy exist at all. They are annoyed that there are people who get to have a great time for a living, doing something creative. Most of us work at destructive, demeaning jobs - jobs that only by a far stretch of the imagination could be categorized as "good work." They usually contain some constructive elements, but on the whole play into a culture and a system where creativity is seen as a luxury, and destruction a necessary and even pleasurable by-product of wealth-accumulation.

So instead of listening, enjoying, and possibly learning what he could potentially teach us... we laugh, imagining ourselves superior to a man who, by his own admission, listens to rocks.
Labels: art